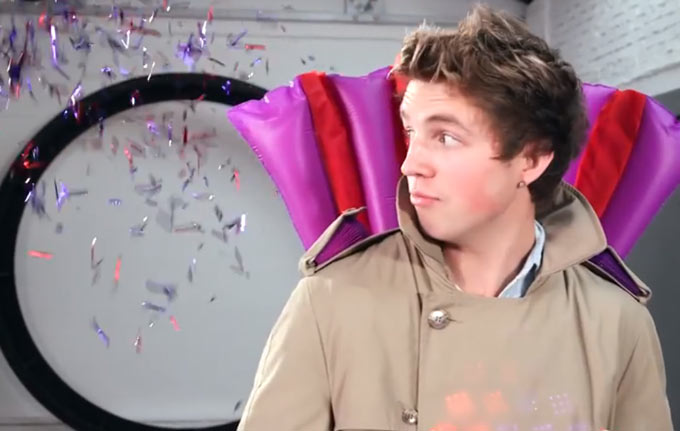 Cadbury, yes the chocolate company with the clucking bunnies, has had the most peculiar piece of wearable tech created as part of their Joyville campaign.

Now in America we typically think of Cadbury one time a year, and that’s Easter time. Of course now that it’s January and we’re still months away from Easter we’re already seeing their delicious Cadbury creme eggs in gas stations across America. But that’s for another rant.

Overseas, in Europe, and especially England, Cadbury is almost as popular as Hershey is here. Their chocolate delicacies come in a variety of flavors and are very popular.

Cadbury is from the school of thought that Chocolate brings joy, well probably because it does. So they’re in the midst of a multi-year marketing campaign called Joyville. They’ve done a number of out of the box things to promote Joyville and to help out in the push they’ve enlisted bloggers.

Their latest idea is called the Joy Jacket. We originally heard about the Joy Jacket reading adage.com. What it is, is  a jacket that looks like a trench coat of sorts, but it’s rigged with all kinds of sensors, lights, interactives and oh yeah, a confetti cannon.

The idea behind the jacket is that it reacts when someone is doing something that they get great joy out of. If the person is experiencing joy then lights emit and dance around the sleeves, waist and torso. Now this isn’t some ploy just for chocolate, as this video from British bloggers Alfie and Marcus demonstrates. Alfie had Marcus try the Joy Jacket with a number of different joyful tasks including holding 4 cute puppy dogs and having his own dance party. The joyful things caused the jacket to react. A not so joyful task, painting a picture of Alfie, did not trigger the jacket to go off.

But you guessed it, when Marcus bit into a Cadbury chocolate bar it was like Mardi Gras on his jacket. The shoulders exploded, a giant peacock tail came out of the back, lights danced around and corners of the jacket folded up to reveal a majestic Cadbury purple. Oh yeah, and the Confetti blaster went off.

The jacket was designed by an interactive studio called Hirsch and Mann and commissioned by PR firm Golin Harris. In the video below the team at Hirsch and Mann talk about how a sensor controller is hooked up to a Raspberry Pi computer to make all the magic happen.

These jackets aren’t for sale, they’re being sent to various European video bloggers to see what kind of fun they can have with Cadbury and the Joy Jacket.