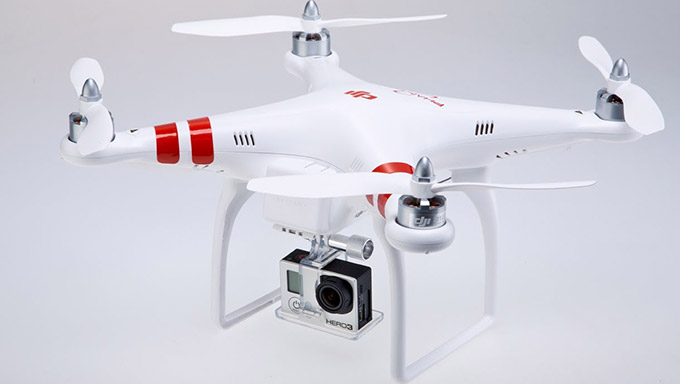 Yes it’s that time of the year again, everyone has eaten turkey, and heck everyone’s already done Black Friday shopping, time to get back to the grind and talk about CES. The International Consumer Electronics Show will be January 6th-9th this year in beautiful Las Vegas. As you know it’s the show of all shows that shows off what to expect in technology in 2015.

Drones are nothing new to CES. Parrot has been showing off their quad-copter in a net enclosed booth for the last four years. But now, ever since Jeff Bezos said he might want to deliver Amazon Prime purchases via drones, everyone’s been talking about them. But don’t let that have you fooled. Unmanned aircraft devices have been around in military applications for the better part of a decade.

Now though, we could see them go uber mainstream thanks to the good people at GoPro.

GoPro is that mountable, extremely easy to use camera that made history by selling bajillions of them at Best Buy and turning into a billion dollar company itself. Now skaters, snowboarders, surfers, pranksters, runners and just about anyone who could use a mobile, mounted camera, has a GoPro.

GoPro recently went public and did so positively, just about better than any other tech IPO in the past year. Now they’ve got some cash and TheVerge suggests it’s time for a new product line. Why not combine that wireless ,high quality mountable video camera with a drone like device.

Sure GoPro’s have been fastened to quad-copters and other drones but the company making their own means that they could focus on the features in the drone itself that will make the picture better, and easier to control.

While there’s obvious privacy ramifications with drones made by gopro, it wouldn’t be all fun and games. Law enforcement could use drones like this to navigate dangerous situations, as could fire departments and other first responders. TV stations and crews could use drones like these and even builders, forestry workers and others. The market is extremely large. Sure some would just pick them up as toys as well.

The Wall Street Journal reported on Wednesday (behind their paywall) that “The company plans to start selling multi-rotor helicopters equipped with high-definition cameras late next year, aiming for a price tag between $500 and $1,000, according to these people,” The Journal went on to say “The entry of a big consumer-electronics brand to the drone market signals how mainstream — and lucrative — the industry has become in just a few years. Consumers have flocked to unmanned aircraft in recent years as technology advances have made them smaller, cheaper and easier to fly, leaving regulators scrambling to keep up.”

We’re expecting to catch a glimpse of these GoPro infused drones at CES in Las Vegas in January.