The Samsung Press Conference at CES 2014 was more a display in theatrics than anything else. It had all the elements that make wonderful theater: a message of social good, celebrity cameos, an onstage meltdown by Michael Bay, incredible video and graphics displays, and the cast bid us farewell in musical exit. Great theater! However, it left much to be desired in terms of announcements and was incredibly underwhelming in terms of product announcements. The products that were announced, aside from the new tablets, fell quite short of what we have come to expect from Samsung.

The press conference began with Samsung CEO BK Yoon laying out the companies goals and plans for the future. The main focus of Yoon’s address was that the home would become a major focus for Samsung. This starts with Samsung Smart Home. 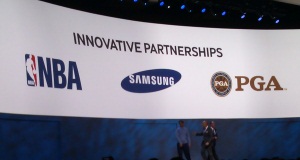 After discussing Samsung Smart Home, Mark Cuban was brought on stage to illustrate the companies new content partnerships. The NBA and the PGA Tour have partnered with Samsung to bring exclusive content to Samsung devices. Again, so what? The NBA is the least popular of the big 3 U.S. sports with viewership being incredibly dismal until the playoffs. The PGA Samsung partnership is just as uninspiring. The partnership consists of broadcasts and exclusive content for the PGA Championship – the least watched of the four majors – and the 2016 Ryder Cup tournament. Samsung also announced partnerships with Amazon, Comcast, and Netflix. Following the theme, so what? All of this content is available with a Roku and a digital antenna.

Samsung also unveiled the Worlds Largest Curved UHD TV at 105′. This, much like the entire press conference, was a practice in gigantism. Who needs an 8 ft TV? While there was no price or release date given, the companies 85′ UHD TV (uncurved) offering is priced at $39,999.99; Samsung also sold a 110′ UHD TV in South Korea for $150,000 (again uncurved).

The next wave of Samsung products were appliances. Starting in the kitchen, Samsung announced their new Chef Collection: a refrigerator, an oven/range combo, and a dishwasher. In addition, a new laundry machine/drier combo was released.

While Samsung certainly put on a show for the audience, the press conference, aside from the tables, was uninspired. The internet of things and the smart home were touted as if Samsung was the first to ever envision such a thing. The features of the Chef Collection were wholly lackluster, and at times seem – the Chef Pan for instance – like more of a pain in the ass than a benefit. It is a stroke of luck for Samsung that Michael Bay had a meltdown as it served a good distraction from press conference.