T-Mobile has really made strides in digging itself out from a hole that came about when they were supposed to be purchased by AT&T in 2011. They’ve added millions of customers, dropped long term contracts, early termination fees and they’re even offering free music. All of this is under the direction of charismatic, marketing genius CEO John Legere.

Well on Tuesday things weren’t so rosy for the nation’s fourth largest carrier.

The Federal Trade Commission (FTC) has filed suit against T-Mobile in the US District Court in Western Washington. The FTC has accused T-Mobile of bilking customers for hundreds of millions of dollars by charging them “bogus” charges for third party vendors.

In the mobile world “third party vendors” are the companies that offer subscription based text messaging alerts for anything from today’s top sports news to trivia, horoscopes and even Facebook apps.  These third party companies offer the “content” subscriptions and wireless carriers bill them on the company’s behalf, but not before taking a huge commission of their own, sometimes upwards of 40%. Sometimes this practice is referred to as “premium text messaging”.

Back in November Sprint, Verizon and T-Mobile vowed to end a practice called “cramming” which is when third party billing charges or premium text messaging charges are added to a customer’s bill without their knowledge. This report from Ars Technica suggests that the FTC lawsuit could stem from “cramming” that came about before this new pact, led by Vermont’s Attorney General, William Sorrell, came about.

The 17 page action filed by the FTC asks for a ruling to make T-Mobile immediately stop any “cramming” practices and pay back customers.

As part of the November announcement Legere said We believe in making things right for our customers,” and instituted a premium services refund program that would “proactively reach out to customers who were billed for these third party services to give them the opportunity to request a refund for any unauthorized charges.

The FTC included a copy of an actual T-Mobile bill showing. 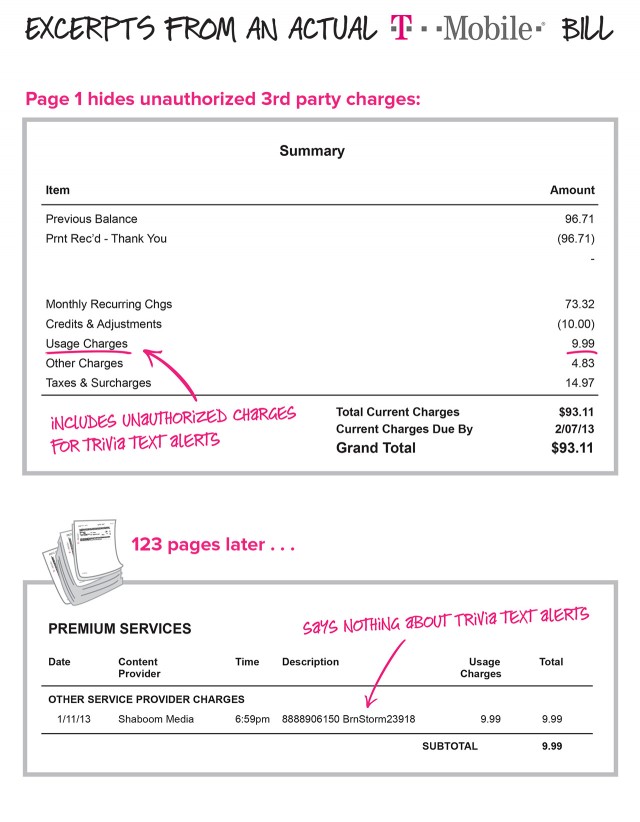 Legere responded to the allegations from the FTC tuesday saying that last year the company “launched a proactive program to provide full refunds for any customer that feels that they were charged for something they did not want.”

“T-Mobile is fighting harder than any of the carriers to change the way the wireless industry operates and we are disappointed that the FTC has chosen to file this action against the most pro-consumer company in the industry rather than the real bad actors,”  he added.