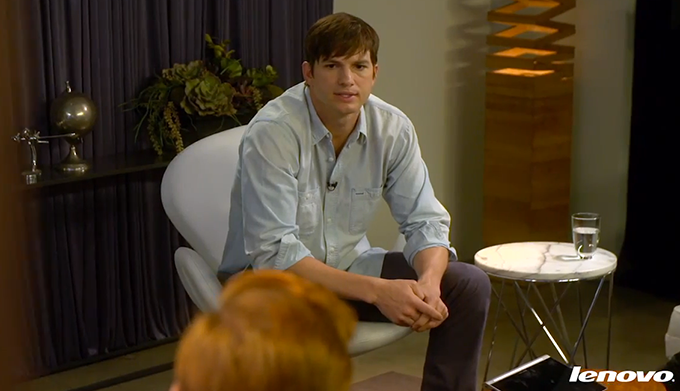 Yes Ashton Kutcher is a real product engineer or at least that’s what he ends up telling one of the members of a Yoga Tablet focus group in the video below. This latest Lenovo video features Kutcher in his role as product engineer for the final installment in a three part series.

So is Kutcher really a product engineer?

Kutcher has been working with Lenovo for just about a year now since the launch of the original Yoga tablet.

What makes Kutcher different than other celebrities that take similar roles at electronics companies is that Kutcher is known for his investments in technology startups. He’s also been known for taking an active role in those tech investments, sometimes sending founders pages and pages of notes on product.

Kutcher and Lenovo, made it clear at last years Yoga launch event that Kutcher would actually have creative engineering input in the design of the Yoga tablet line and other mobile electronics products from Lenovo.

Lenovo purchased IBM’s personal computer business back in 2005 taking over the Thinkpad line of enterprise laptops. They’ve continued to build on the personal electronics and mobile electronics business with a big push overseas. Earlier this year Lenovo bought Motorola’s wireless phone handset business from Google who had purchased it in 2012.

Kutcher seems to take his role as a product engineer seriously and we’ve heard that he actually attends product meetings quite frequently. In this final video he answers a question about being an actor or an engineer, like a boss.

Watch the video below. Lenovo will refresh the Yoga line of tablets shortly, with features introduced by Kutcher.