Google and LG to Bring Project Tango to Consumers in 2015

Google dropped some major bombs at their annual developers conference – Google I/O – this week. However, one of the most exciting announcements was sort-of glossed over by many. On Thursday, during a session about its ATAP – Advanced Technology and Projects – group, Google announced that it is working with LG to bring Project Tango to consumers early in 2015. Project Tango is Google’s 3D mapping project:

Project Tango devices contain customized hardware and software designed to track the full 3D motion of the device, while simultaneously creating a map of the environment. These sensors allow the device to make over a quarter million 3D measurements every second, updating its position and orientation in real-time, combining that data into a single 3D model of the space around you.1

While there were not a whole lot of details revealed about the Google/LG partnership, it was revealed that the first consumer Project Tango device would be a tablet. Further, Google announced a Project Tango partnership with NVIDIA earlier this month. The NVIDIA powered Tango Development Kit is set for release sometime later this year, and will be priced around $1000. The Dev kit, in the form of a tablet, packs some pretty powerful features and specs:

At the heart of the devkit is [NVIDIA] Tegra K1, whose 192 programmable GPU cores deliver the world’s most advanced mobile graphics and performance…It packs a 7-inch screen, 4GB of RAM, 128GB of storage. It will run Google’s KitKat Android operating system. And it will support some of the most recent features in the mobile market, like OpenGL 4.4. Available to developers later this year.2 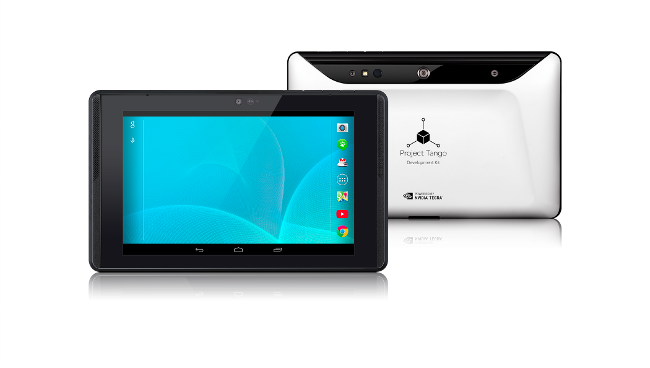 Here is Google’s latest video, showing off some of the functionality of Project Tango: