The annual IFA conference in Berlin Germany is like CES but actually five to seven times bigger. Picture airplane hangar sized halls filled with the top electronics that will be grazing store shelves and online shops in this upcoming holiday season. Many tech journalists, analysts and industry folks consider IFA to be the kickoff to the upcoming holiday season. 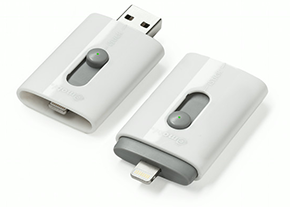 That’s why Sanho corporation, the company behind the HYPER line of accessories took to the show floor at IFA to officially launch their iStick product to the industry.

iStick was originally introduced to early adopting consumers via Kickstarter in a campaign that ran from May 12th to June 17th. The company had hoped to raise $100,000 to bring iStick into production. They ended up raising $1,100,629.00 and ended up with a world of support.  This was Hyper’s 2nd successful Kickstarter after their CloudFTP Kickstarter went on to be the third most successful Kickstarter technology project when it ended.

The iStick is the world’s first Apple approved USB flash drive that has dual connectors. There’s a standard USB connector on one side and a Apple lightning connector on the other side. That allows users to plug the iStick directly into their lightning connected iPhone or iPad and use it as more data storage. iStick comes in a variety of storage capacities ranging from 8gb all the way up to 128gb

Hyper will fill Kickstarter orders this month and plans to have the iStick shipped to retail outlets in time for the 2014 holiday season. You can find out more here.