Jagermeister, the number one imported liqueur in the United States, has a solid reputation for backing things in music. From concerts, to festivals to contests, the drink behind the Jagerbomb has always gone hand in hand with great music in all genres. They do a great job of living their lifestyle.

With that in mind it was time for Jagermeister to step up their app game. Like anyone not living under the proverbial rock, it’s been realized that to connect your brand with your customers you need to do it in the most intimate of places, their smartphone.

That’s why Jagermeister launched their new social mobile app JagerBonds on Tuesday as the cure to FOMO.

What’s FOMO you ask? It’s that icky feeling of almost jealousy that you get when you have to stay home to cram for a test, prepare for a meeting or get stuck babysitting the cat, while your friends are no doubt out taking shots of Jager and listening to some jams. FOMO is the Fear Of Missing Out syndrome.

JagerBonds premiered in New York City on Tuesday night with what looked like an unbelievable event with Tribe Called Quest’s Q-Tip providing the music for the evening. At the party people were able to use Jagerbonds, an app that transforms images and videos from multiple users’ social media posts into a video highlight reel of a groups’ night out with Jagermeister, resulting in an inherently share-worthy highlight video of each users’ personal experience and “great night out with Jägermeister,” that were uploaded to users social channels. 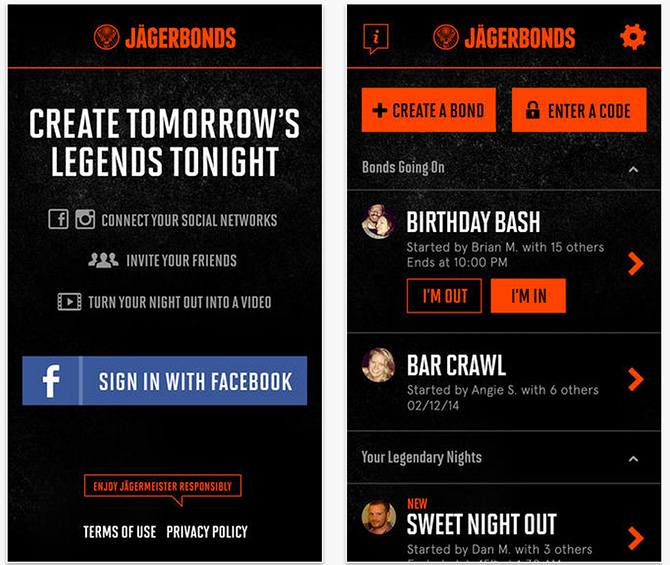 Keeping with the Jagermeister’s high-energy and social side, the app also allows uploaders to combine their individual night with other consumers and provides an innovative way for Jagermeister drinkers to capture the energy and feel of the time-honored Jagermeister night in a whole new way. While out having fun with Jagermeister, everyone involved in the Bonds can post photos and videos to Facebook or Instagram as usual—JagerBonds works in the background to compile the posts and pair them with songs from some of today’s hottest artists, including Fall Out Boy, Eli Young Band and Paul Oakenfold.

The app will also be active in a partnership with WOVEN in Austin, Texas at the intersection of both the Interactive and Music weeks at SXSW. The WOVEN House will be open for five days at Trinity Hall in the heart of SXSW. WOVEN will launch a truly interactive platform that appeals to every sector of the music and tech audience. With up to three different music acts each night, JagerBonds will be at the ready to share the experience with friends across the country.

JagerBonds is available now in the iTunes app store and the Google Play Store. If you’re attending SXSW this seems to be a must download app.