For That Reason, I’m Out! OWN IT [Mark Cuban] 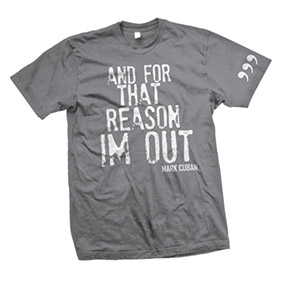 Cuban is a self made successful entrepreneur, getting his feet wet selling garbage bags door to door and then selling computers before he even owned one, to selling his broadcast.com to Yahoo in the thick of the first dot com bubble. Cuban took proceeds of that and bought the Dallas Maverick’s which he turned into one of the most recognized brands in the NBA.

Entrepreneurs young and old love Cuban’s style both on the small screen and on the courtside. They are yearning to get their hands on some sweet Mark Cuban merchandise.

While Cuban tells startups not to waste money on swag: “NEVER EVER EVER buy swag. A sure sign of failure for a startup is when someone sends me logo polo shirts. If your people are at shows and in public, its ok to buy for your own folks, but if you really think someone is going to wear your Yobaby.com polo you sent them in public, you are mistaken and have no idea how to spend your money” Cuban said 8 years ago in “A Couple of My Startup Rules”.

He delivers that advice right next to making sure startups don’t waste their money on an Expresso Machine.

But certainly when you’ve had the success that Mark Cuban has, but more importantly, when you’ve become a global brand like Cuban has, then and only then can you start a swag shop. Which is exactly what Cuban has done. 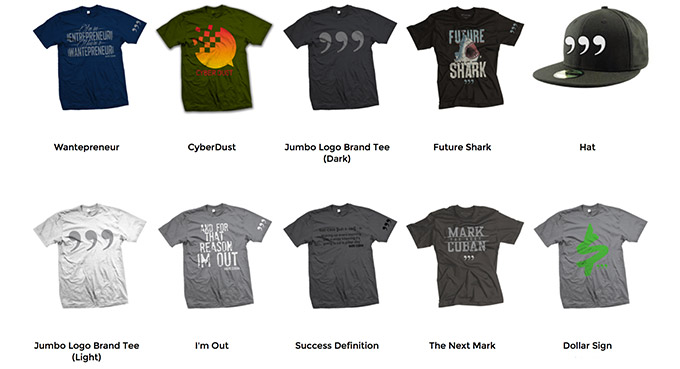 Cuban has opened shop.markcuban.com an official part of Mark Cuban Companies. There you can purchase a handful of great t-shirts and even a hat, featuring some of Cuban’s famous lines and quotes right from the shark’s mouth.

“I’m an entrepreneur, you’re a wantrepreneur”, Future Shark, and my personal favorite “And for that reason I’m Out” are all found on T-shirts in Cuban’s shop.

So instead of wasting money at vistaprint putting your logo on a t-shirt that no one will wear after sxsw, go ahead and get some inspiration from Cuban here at shop.markcuban.com