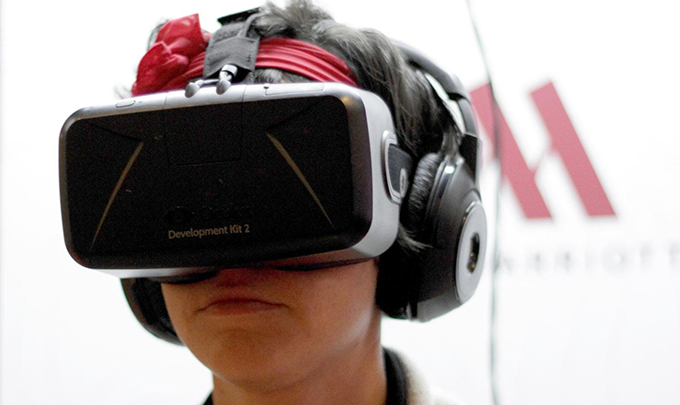 If you were wondering why Mark Zuckerberg and the Facebook coffers ponied up $2 billion dollars for Oculus Rift, companies like Marriott may be the key.

The flagship brand for one of the largest hotelier’s in the world has announced a new marketing campaign that involves AR/VR technology provided by Oculus Rift.

While it may seem a little too technologically advanced for a hotel company as storied as Marriott it actually speaks to their innovative approach to filling rooms across the globe. Many of the new trends people take for granted in the hotel industry start with a Marriott or a Sheraton location. Take smartphone hotel keys for instance, that technology is being tested at a Marriott in Minneapolis.

“A lot of people are curious about how we got here,” said Michael Dail, VP of Marriott Hotels Brand Marketing told adage.com “Marriott Hotels has been an iconic brand and we look into the future on how to lead the category.”

As for the Oculus Rift and the VR technology Marriott is employing the Facebook owned technology for destination sampling. Marriott has teamed up with creative studio, Framestore, to take people on quick 90 second trips to London and Hawaii using Oculus Rift.

Marriott hotels recently stopped by one of their Cambridge Massachusetts properties to show off the “teleporter” technology. It’s all part of Marriott’s “Travel Brilliantly” campaign reports adage.com a way to connect with younger, more technologically savvy travelers.

Taryn Luna a correspondent with the Boston Globe provides an entire overview of the teleporting experience here.

“Next I found myself more than 40 stories above London on the rooftop of Tower 42, one of the city’s tallest skyscrapers. In the distance, the Tower Bridge, St. Paul’s Cathedral, and the London Eye were lit up in a night sky. The platform beneath me tilted and I felt dangerously close to the roof’s edge. Wind zipped around me. My palms were sweating. I looked straight down and heard cars below.” Luna said, describing the experience with the Oculus Rift.

While Marriott is looking to use the technology to sell vacations across the globe, their stop in Cambridge was flanked with the tech savvy, some that just wanted to try out Oculus Rift.

“It’s hard to pass up a chance to try out the Oculus Rift,” Joyce Chen, director of communications for the MIT Enterprise Forum told Boston.com. “I work in tech and I think almost everyone in this area does…Oculus rift is one of the breakthrough technologies of this year.”

“New York was really interesting but it was more of a travel experience,” Sarah Steffenauer Marriott’s global PR director said. “But here in Boston it is all about the technology. They’re so familiar with the Oculus Rift technology that they’re really excited seeing it used in a way that’s not gaming.”

Marriott will continue to bring the technology on a tour across the globe and hope to continue to use it to show travelers new destinations.