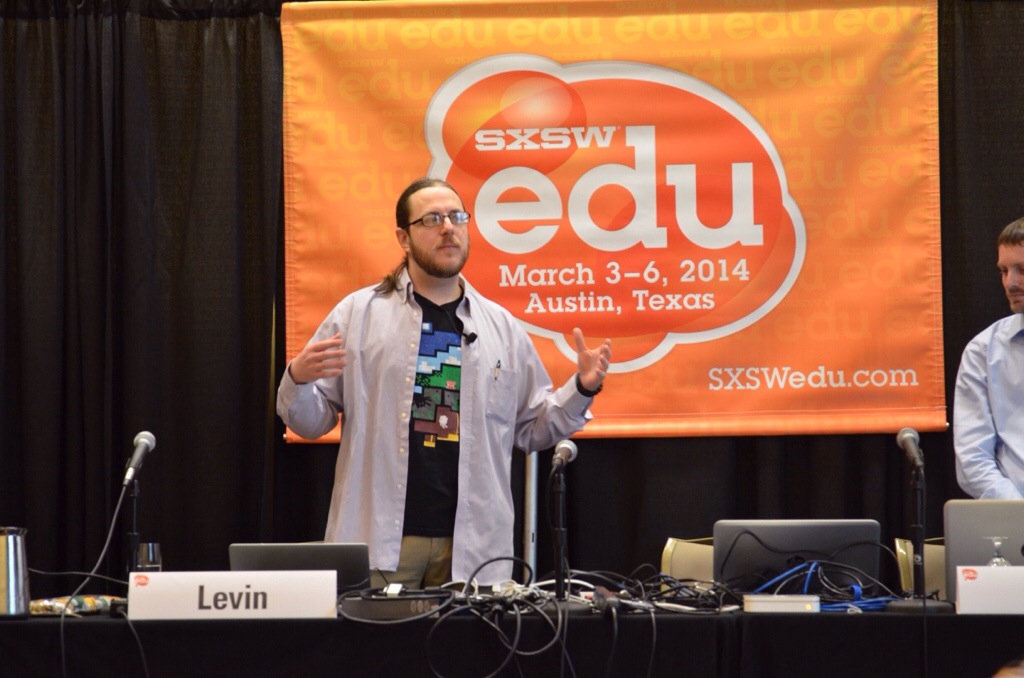 Carol Jackson has been teaching seventh and eighth graders outside of Chicago for nearly 20 years. Over the last two years she’s started to hear a lot about a Minecraft from her students.

“We had a halloween party and a bunch of my students came dressed with boxes on their heads” she told us at SXSW in Austin Texas. “One of my students explained that the costumes were from Minecraft”. Of course she admits to Googling the 8 bit blockbuster game but in the same breath admits she didn’t understand it.

Jackson says she provides a different spin on detention. For students that need to spend time with her after school for disciplinary reasons, they are required to teach her something new. “I’ve learned about memes, Google Glass, UFC fighting and of course Minecraft”. But after her lesson at the beginning of this school year she kind of put it on the back burner. That was until Wednesday morning when there was a Minecraft Your Classroom panel.

The panel/workshop lasted over the two hours allotted Wednesday morning but more than half of that time was spent with a standing room only room full of teachers and administrators playing Minecraft. Well over 90% of them, playing for the first time.

The panel and workshop were hosted by Joel Levin the creator of Minecraftedu.

Levin has been a teacher for over a decade, but a gamer since the Pong era. But his life changed when he brought the regular version of Minecraft into the classroom. After introducing his students to the world of Minecraft he realized that the game was an open sandbox of sorts and that teachers at any grade level from K- continuing education can use the game to teach a variety of things.

That’s when Levin started working with Majong of Sweden, the creator of Minecraft, on bringing the game into the classroom more prominently.

Minecraft “mods” are nothing new there’s people modding the game all the time, that’s one of the attractions to it. What Levin came up with Majongs blessing was a new educational version of the game.

The differences between regular Minecraft and Minecraftedu include:

So what are teachers teaching with Minecraft?

There are obvious curriculum areas like building, teamwork and collaboration. Beyond that Levin says teachers are even using the game to teach music and art.

Stephen Elford, Levin’s cohost for the panel is a teacher in Australia. He uses Minecraft to teach a variety of lessons. He showed a video during the panel of using Minecraft to teach his students about solids, liquids and gasses. The students were in the game, surrounded by a brick wall. Effie (as he is known by many) used fire to get the brick walls hot enough to turn to liquid and then of course they heated up enough to turn into a gas. In the video you could hear the students participating and cheering as the gas paved the way for them to be free.

Ellie is one of many teachers who believe that Levin and company don’t charge enough for Minecraftedu. Educators can get the game, teacher component and a 25 seat license for $376. Elfie said that his school will spend thousands of dollars on digital science curriculum that quickly gets outdated.

The response in the room was overwhelmingly positive with one teacher saying she would pay for it herself if the school wouldn’t.

A high school teacher named Pam said that one of the advantages to Minecraft in the classroom is that students learn better when they are engaged with what they are doing. Minecraftedu is a perfect example of that.