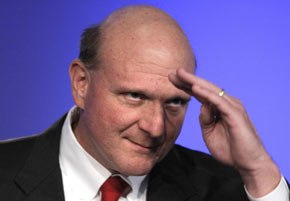 Fresh on the heels of the news that former Microsoft CEO Steve Ballmer resigned his board seat with Microsoft to focus on his other endeavors, the 58 year old executive, and LA Clippers owner, has accepted a position as a professor at Stanford.

According to Geekwire Ballmer has teamed up with Stanford faculty member Susan Athey. The duo will teach an 80 student class called “Leading Organizations” this fall semester. Athey has been a consultant to Microsoft for the past seven years.

The class will focus on ways that CEO’s create value in their organizations. The class is part of Stanford’s MBA program. “We pair practitioners with academics scholars in teaching the MBA program, so Steve Ballmer and Susan Athey will be an example of that practitioner-scholar pairing,” Helen Chang the assistant director of communications at Stanford’s Business School told Business Insider.

Ballmer and Athey have apparently been working on developing the class since May of this year. Ballmer was looking at different schools where he may fit in a teaching role of some sort and decided on Stanford because of his relationship with the school and with Athey.

“It’s a course Steve and I are designing together,” Athey told BI. “It’s a new course, original content. We’re looking at how you create value in organizations from a variety of different perspectives — different managerial functions and providing a theoretical conceptual framework and filling that in with real world examples and experiences. It’s a course that looks at lots of different perspectives on a CEO’s role on creating value in an organization.”

During the Spring semester Ballmer will teach at USC which is closer to Los Angeles. Ballmer completed his $2 billion dollar purchase of the Los Angeles Clippers earlier this month. Microsoft co-founder Paul Allen is also an NBA owner, he owns the Portland Trailblazers along with the NFL Champion Seattle Seahawks.