Walmart Is The Place To Be “Cyber Week” 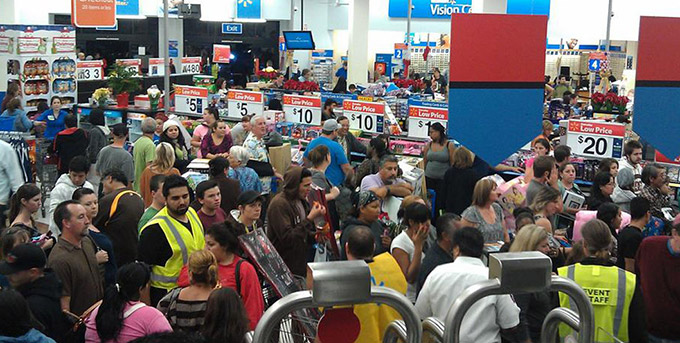 We all know that after we fill up with turkey on Thursday for Thanksgiving, it’s off to the races for Black Friday. For those of you that still know what Radio Shack is, you can start your shopping fix right after turkey dinner, or heck, right before. But for those of us Americans with that shopping bug who are looking for the best deals, they might not be at Best Buy, Target or Toys R Us.

They may be at Walmart, and you might not even have to leave your house.

Walmart is kicking off “Cyber Week” on Saturday November 29th and running it through Friday December 5th. Typically the huge holiday push begins with “Black Friday” at brick and mortar stores and then online sales kick off the following Monday with Cyber Monday. Apparently Walmart doesn’t want to waste anytime.

TechnoBuffalo has obtained some of the deals early on and reports that “Online, you should be able to find a 55-inch Samsung 4K Ultra HD LED HDTV for $998, a savings of $500, Walmart said. Additionally, and this is also just online only, the firm will sell the PlayStation 4 Lego Batman & Little Big Planet Console Bundle with your choice of one other game and a controller for $449.”. That’s an incredible price for a 4K tv and an amazing price on a PS4 with not one but two games.”

Walmart reportedly has over 500 amazing deals for Cyber Monday and they are doing their “pay with cash” promotion this year as well. Walmart will allow you to place your Cyber Monday orders online and then head over to your local Walmart and pay with cash.

“The New Black Friday at Walmart is five days of unmatched savings, and it culminates on Cyber Monday where we treat customers to the biggest online savings of the season” said Fernando Madeira, president and CEO, Walmart.com. “We’re doubling down on Cyber Monday this year, offering more than twice the number of deals compared to last year, and delivering it on a new web site that makes shopping easier and faster with free shipping on the season’s hottest gifts all week long.”

Why the extra big push for Cyber Monday? Well it turns out that this year, because of the calendar, three times as many Americans will get their paycheck on Cyber Monday (December 1st) than previous years, thus having much more spending power.

You can find these deals at walmart.com