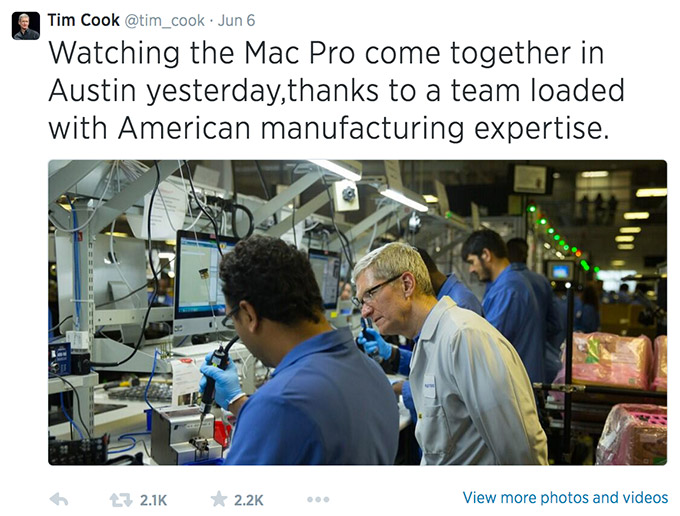 Right after Apple CEO, Tim Cook made his appearance at Apple’s World Wide Developer Conference this week, he and Apple executive Eddy Cue went to their Austin Texas plant where the new top shelf Apple Mac Pro is manufactured.  Apple’s PR department made a big deal out of the trip, picking up on the momentum from Monday’s keynote.

Cook was also trying to take advantage of the trip to the Austin plant and even took to Twitter during the tour. Now, the Apple PR machine is probably wishing he had kept his iPhone in his pocket.

While touring the factory Cook tweeted out a picture of the assembly line. The picture just happen to get a glimpse of a row of iMacs that were actually running Windows.

The photo was apparently taken on Thursday and then posted to Cook’s official, verified Twitter account on Friday. In fact, even with the attention the little Twitter faux pas created the photo was still up when this story was published.

Cook has over half a million followers on Twitter and has only tweeted 64 times, so when he tweets it’s a big deal and gets retweeted quite a bit. The particular post had 2.1k retweets and 2.2 photo shares, and of course that doesn’t take into account people who retweeted the retweeters.

While many didn’t notice the windows program running on the iMacs, a few folks did and that was enough to get some Twitter conversation going.

Twitter user @PeterWLFC said: @ryandolan123 Macs are made on Windows which then allows android to be made on the mac. :)” user RBXcmn65 added.

It’s not clear which version of Windows is running on the computers, but it definitely is Windows. Many people across social media have suggested that it’s Windows XP. They’re also not sure which program is running, but it very well could be an Electronic Design Automation (EDA) program or other program that the Apple developer base has passed over, according to PC World.

Cook took a lot of flack after his Keynote on Monday for blatantly ripping Microsoft and Android. Cook called Apple’s own OSX Mavericks ““This is the fastest adoption ever of any PC operating system in history,”