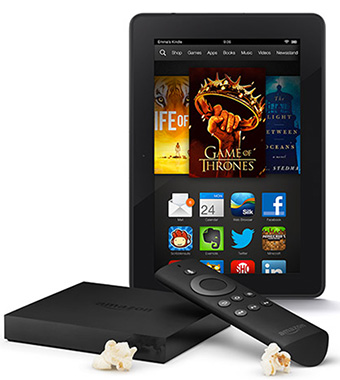 Every now and then the fine folks at Amazon offer a great deal on the hardware that helps get their streaming media, downloads and apps into users/viewers hands. Back on Valentine’s Day Amazon offered discounts on the entire Kindle Fire line. Just before the holidays Amazon started offering a payment plan for people who wanted to purchase a Kindle Fire HDX tablet.

For a limited time you can pick up both Amazon devices for just $328. That’s a savings of $79 when you buy both devices in a new bundle. Amazon hasn’t said how long the “limited time” will be but previous limited time offers have typically for an entire month. Being that we’re just starting the month of June, it’s quite possible that this promotion will last until June 30th.

However, since Amazon hasn’t exactly said how long it will last it would probably be best to take advantage now.

If you’re not familiar with the Amazon Fire TV, it’s their set top box that offers most of the digital streaming apps you’ve come to expect, with an emphasis on Amazon Video and Amazon Prime Video. The Amazon Fire TV also features a full suite of games and the ability to buy a separate game controller.

The Kindle Fire HDX is the latest in Amazon’s series of tablets powered by a layer of Amazon proprietary software on top of Android.

You can take advantage of the deal here.