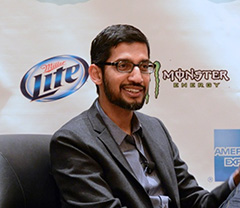 Google’s Sr Vice President of Android and Chrome, Sundar Pichai took to the stage at SXSW on Sunday afternoon as part of SXSW’s Featured Sessions. The session, entitled “Sundar Pichai, conversation with John Batelle”, was a fireside chat style session focusing on two of the fastest growing open platforms in the world, Android and Chrome.

Much of the discussion turned to wearable technology, probably the fastest growing technology in the world right now. During Mobile World Congress, last week, several major companies unveiled wearable devices in the form of fitness trackers, sensors and smart watches.

Google was early to market in the wearable technology space, introducing Google Glass nearly two years ago, and seeding early adopters 18 months ago in their explorer program. It’s also been long rumored that Google was working on a smart watch that we are hoping to see unveiled this June at the Google I/O annual developer’s conference.

Pichai wouldn’t speak to weather Google is developing another wearable device in his conversation with Batelle however he did talk a lot about wearable technology.

What he did give us was news that in two weeks Google plans to release an Android SDK with a focus on wearable technology. Specifically, this SDK will allow developers to use features with Android specifically in a wearable setting. Pichai said Google is looking at the wearable space at a platform level, much as they already do with Chrome and Android, making wearables a natural extension.

For Google the vision seems to be far beyond a smartwatch or smart eyewear. Google is hoping to entice developers to use Android to develop that layer that will work across all devices.