Apple’s Expected Healthbook Could Be The Future Of Mobile Health? [MOCK UPS] 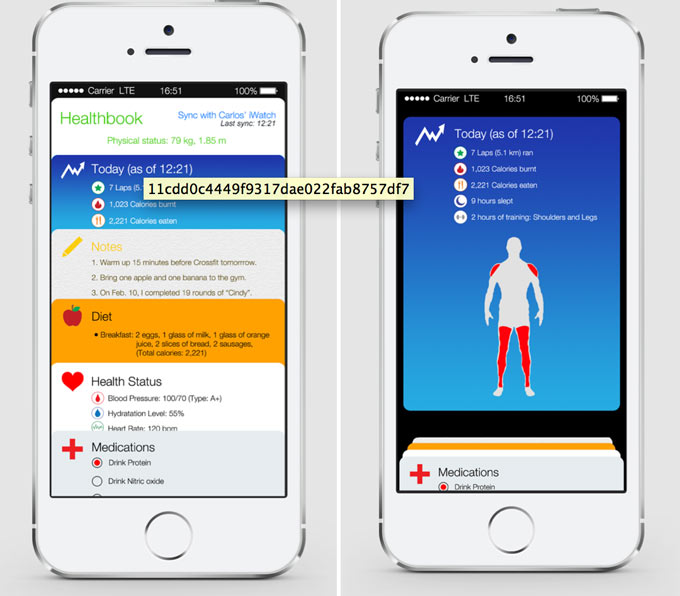 While we’re not sure how many people actually use Apple’s Passbook we’re sure it’s quite popular. As more and more third parties are getting their cards and tickes into the Passbook ecosystem it becomes more and more popular. Passbook stores your loyalty cards, credit and debit cards and event tickets so it’s really easy to keep track of the things that used to be in your wallet

Health has always been important to Apple but they haven’t taken a front row seat in the mobile health world just yet. More and more Apple Store inventory has been devoted to sensors, wristbands, wearables and even scales designed to interact with people’s i-devices. Apple wants to continue to expand on the idea that the iPhone can help in all aspects of your life so naturally health is expected to be next, that and an iWatch.

The iWatch has now been rumored for the last three years. While Apple is surely sitting back and observing the smart watch landscape, their engineers are diligently working on prototypes for what their wearable will look like.

The delay comes from functionality and design. You see nobody wants to admit it but when the iWatch comes out finally, it will be Tim Cook’s first big device. Since the passing of Apple founder Steve Jobs, the new Apple, led by Tim Cook, hasn’t released an entire new product line the way that Jobs came back after his exile and released the iPod, then the iPhone and then the ipad.

What most don’t take into account, and what can still be applied today with the iWatch, is the fact that neither the iPod (MP3 Player), iPhone (smartphone) or iPad (tablet) were category creators, just category winners, which is a huge victory for Apple.

So now, mockups have surfaced on what the new Healthbook will look like and what it will do. Healtbook, in all it’s Apple-ish glory is also expected to work hand in hand with the iWatch for way more health related interaction then just monitoring steps walked and your latest carb intake.

9to5mac, which has been way more correct on Apple rumors than incorrect) says that Healthbook will function a lot like Passbook in that the app will contain different cards. Each card will contain some kind of relevant, regularly accessible information for the user. It will also have different sources for the data. Some will be user input others will be data points from the smart watch, and even others could interact with third party devices that Apple has had a long standing relationship with.

The Healthbook mockups also suggest it will have main notifications view of your entire body and will let you know when certain parts of your body need tending too.

Healthbook is just the working code name and may not be correct at launch. No matter what the name though, Apple could very well be the company that makes mobile health go mainstream.