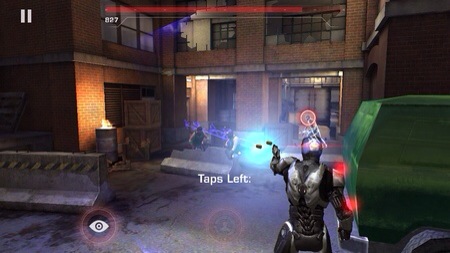 Glu Mobile, the successful app development studio behind blockbuster hits like Deer Hunter, Contract Killer and Gun Bros, is back again with a game that’s sure to be popular among both the young and old. The company has been tasked with creating the accompanying “free to play” game for the forthcoming a RoboCop movie.

With Detroit all but bankrupt there’s no better time then ever to have the armored robotic cop that first came on the scene in 1987, return to his crime fighting ways. To facilitate that MGM and Columbia Pictures are distributing the Strike Entertainment remake of the 1987 hit film.

Robocop is slated to hit the theaters in the US on February 12th and star Joel Kinnaman as Alex Murphy, who is Robocop.

Glu Mobile’s game adaptation of the forthcoming flick is slated to be released any day. Pocketgamer is reporting that the game is already being tested in Canada.

The Robocop game is reportedly a third person shooter where the user will control Robocop. As Robocop you’ll be tasked with dodging sniper attacks, battling robots, saving hostages and saving informants. No worries you won’t have to balance Detroit’s budget.

You’ll have all types of weapons and futuristic gear at your disposal including drones. But no worries these drones won’t be delivering Amazon packages in between helping you defend the people.

As with most “free to play” games and most Glu Mobile games, you’ll be able to upgrade your armor, and weapons with in game funds and digital currency, which you can purchase in game.

Robocop will be available very soon and we’ll let you know when that is as soon as we know.