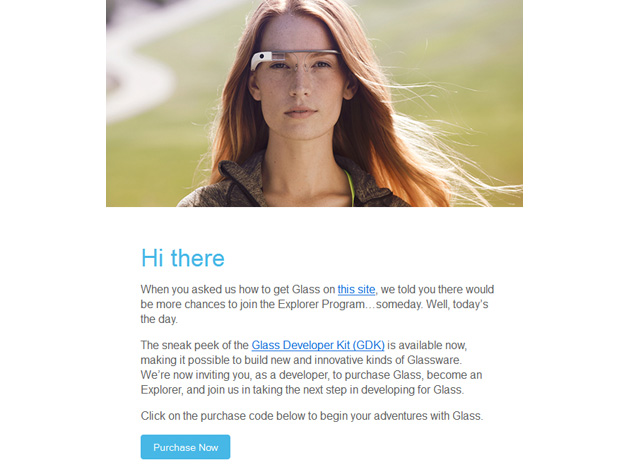 While it is still in a “beta” form Google Glass has certainly gained a bunch of attention, but unfortunately getting your hands on a pair of your own is not just as simple as walking into a store and buying a pair. Google first introduced sales of Google Glass back at Google I/O 2012 and then earlier this year they started the Glass Explorers program. For those who didn’t attend Google I/O, or get selected on the Explorers program all that you could do was watch your friends enjoy their Glass, but recently they began expanding the program.

Google has recently announced their Glass Developers Kit, GDK, and allowed anyone in the Explorers program to invite up to three friends to join as well. While this was great and the added testers will certainly help iron out the kinks before release, Glass is still $1,500 putting it way out of the price range of many people. Instead of just putting Glass in the hands of people who want to use it, Google wants to get it in the hands of those who can help build out the platform and develop apps for it as well. Google has started emailing developers with links to purchase their own Google Glass.

Developers will still need to come up with the money for the initial investment, but with the new GDK and the recently available Mirror API there is definitely a ton of potential here for developers to get in on the ground level and grow with the program. At this time it is unsure how wide Google is going to make the Explorers program before they bring these to the hands of general consumers, but we can hope that in the coming months they will finalize the design and bring the technology to consumers at an easier price point to swallow.