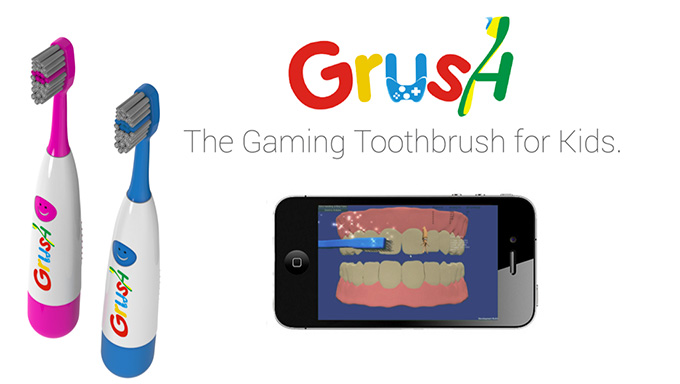 The internet of things is coming to everything, and while you may not think it’s possible, the internet of things has made it’s way to tooth brushes. Ethan Schur, the co-founder of Grush knows that there are already tooth brushes on the market with sensors in them, but after checking out Grush compared to others like Beam Brush and Funny Brush, Grush has something the others don’t, and that’s FUN!

If you’re a technofile, geek, or early adopter you may think it’s completely awesome that a tooth brush can have sensors on it and track data about teeth brushing, but to your five your old, that really isn’t cool. In fact it’s probably really boring, and that was the problem with previous technology that tried to go down this path.

What Grush does is totally gamifies the teeth brushing experience.

For starters Grush comes with a mount so you can mount your smartphone to the bathroom mirror. This way your kids can see the Grush Games while they’re brushing their teeth.

Then in a miraculous marriage between app and hardware, Grush Games come alive as your child brushes his or her teeth. Right now Grush will let your child kill monsters, play musical instruments or brush their favorite animals all while brushing their teeth. And, there’s more games in the works already.

So after you’ve secured the phone on the mirror and loaded the Grush Games app, your son or daughter brushes their teeth. The sensors in the brush correspond with what’s on the screen. In the monster game monsters will go to different spots on their teeth on the screen and as they brush their teeth the monsters die, wiped away by teeth brushing in somethng as epic as those Crest commercials back in the day.

The same idea is applied to the other two games making teeth brushing fun, and more importantly challenging. As more and more kids start getting exposed to playing Grush Games scores are tracked, shared and bragging rights can be had. So what’s that mean to the child, well beating someone’s high score means brushing better and what dentist wouldn’t love that.

You can get Grush early for just $49 and you’ll receive one Grush Brush along with 2 replacement heads and an unlimited subscription to the Grush Cloud, just click here.