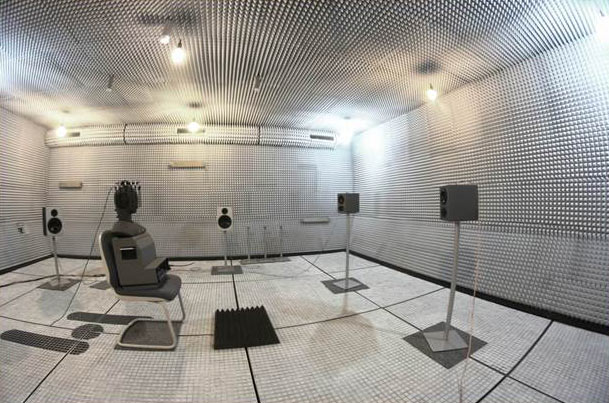 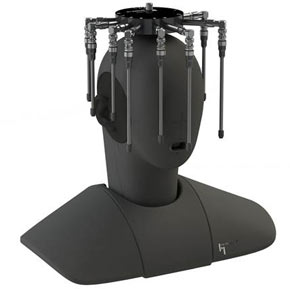 At Mobile World Congress in Barcelona this actually fascinated me. Perhaps it’s because I’m an audio junkie or perhaps because I’m a wireless junkie or perhaps both. I’ve kind of always wondered how companies like Samsung, HTC, LG, Lenovo, Sony and all of the others can make claims about their background noise on calls, or more importantly, lack thereof.

Maybe I envisioned technicians driving through the 405 in California or across the desert, or maybe hanging out at a loud rock concert just to see if they could hear. Perhaps I thought the Verizon “can you hear me now” guy somehow got employed by an OEM manufacturer to test the background noise for phones.

Well it’s actually done in a lab and a German company called Head Acoustics is one of the pioneers in background noise research for wireless phones and other devices.

Like many, with an odd desire to actually see the crash test dummies in car tests in the lab, I was curious about how background noise was tested.

Head Acoustics has developed a new system called 3PASS: 3-dimensional Playback of Acoustic Scenarios. In the demo environment at Mobile World Congress their background noise testing facility looks like the surround system of someone’s dreams but with microphones. How much noise is penetrated through the ear, cheek, mouth, behind ones head etc. All these factors play into how a wireless manufacturer places microphones, how strong the microphones are and what kinds of microphones they use.

Head’s new 3PASS system is the successor of a system called HAE-BGN which is used around the world in test labs for just about every manufacturer.

The major advantages of 3PASS compared to its predecessor are its ability to preserve and accurately reproduce the spatial characteristics of background noise which makes the system valuable for the development of complex background noise reduction algorithms. This is of particular importance for modern smartphones, especially for those with more than one microphone. Another advantage is that instead of the previously required three PEQ front ends, now only one labBGN front end is required, which considerably simplifies the measurement setup.

Major components of the new system are:

An 8-loudspeaker setup including amplifiers and cables complements the system setup.

It all revolves around the placement of the equipment and run through this box.

It’s obvious if you’ve been a wireless phone user as long as I have that the sound and clarity has vastly improved and it’s all attributed to systems like this.

You can find out more about it here.