iStick The Flash Drive For Your iOS Device Coming This August 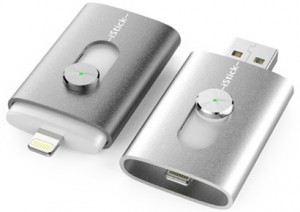 Sanho Corporation, the company behind the Hyper line of mobile and computer accessories, recently unveiled the iStick via a crowdfunding campaign on Kickstarter. The iStick is the first flash drive that comes with both a standard USB connector and an Apple MFi Certified lightning connector. The lightning connector means that you can connect the iStick to your iPhone, or iPad like any other accessory that connects through the port at the bottom of you iOS device.

The iStick’s integrated software means that users can connect the iStick to their iOS device and quickly transfer or play files directly from iStick to device. Couple that with an Apple TV device and you have virtually limitless storage for on the go media.

Sanho/Hyper launched a $100,000 Kickstarter on May 12th and quickly met that goal in just three hours. Now, the campaign is over $500,000 and Sanho promises to ship the iStick device in August.

This isn’t the first big Kickstarter for Sanho, 2 years ago Hyper’s CloudFTP project also finished over-subscribed and when it ended, became the third highest funded Kickstarter project at the time.

“We only reserve Kickstarter launches for our very best products just like what we did with CloudFTP 2 years ago. In addition to crowdsourcing funds, we also want to crowdsource ideas and suggestions to make the product even better and to give it the biggest launch possible.” Daniel Chin, CEO of Hyper and Sanho Corporation said in a statement.

You can still preorder the iStick on Kickstarter until June 17th here. You can find out more about Hyper’s other products here.