King Digital Entertainment, the company behind such games as Candy Crush Saga and Farm Heroes Saga, wen public on 26 March 2014. The company announced the proposed scope of their initial public offering (IPO) on Monday 25 March 2014:

King Digital Entertainment plc (NYSE: KING), a leading interactive entertainment company for the mobile world, today announced the pricing of its initial public offering of 22,200,000 of its ordinary shares at a price to the public of $22.50 per share. King is offering 15,533,334 shares and certain selling shareholders are offering 6,666,666 shares.1

However, the market had other ideas. The lackluster opening was, perhaps, best described in an article from The Verge yesterday:

King Digital Entertainment…went public this morning on the New York Stock Exchange after raising about $500 million in an IPO that valued the company at about $7.6 billion. But it fell short of that valuation with a poor early response from the market, with shares opening at $20.50 — beneath the offer price of $22.50 — and falling still lower.2

The $KING IPO turned out to be the worst initial public offering of 2014.3 The disappointing opening was incredibly similar to Zynga’s IPO of late 2011, though $KING had a more dramatic downturn at the day’s close. Here is what CNNMoney had to say about the Zynga IPO:

That is not where the similarities end. We wrote about Kings IPO Prospectus back in February. In said prospectus, it was noted that King, “generated $1.9 billion in revenues in 2013, or $5 million a day. It posted adjusted earnings before interest, tax, depreciation and amortisation (EBITDA) of $825 million in the year, up from $28.5 million in 2012.” Those are eerily similar to Zynga’s numbers immediately preceding their 2011 IPO:

Zynga’s financials are stronger than many of its newly public counterparts, and the company has multiple revenue streams.

It will be interesting to follow the $KING stock in the coming days. Will the game maker suffer the same fate as Zynga? 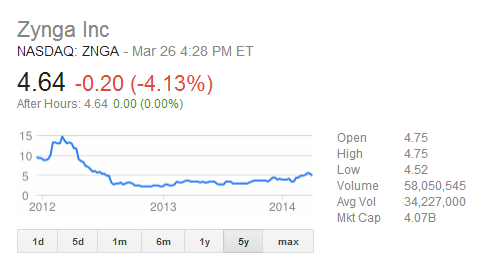