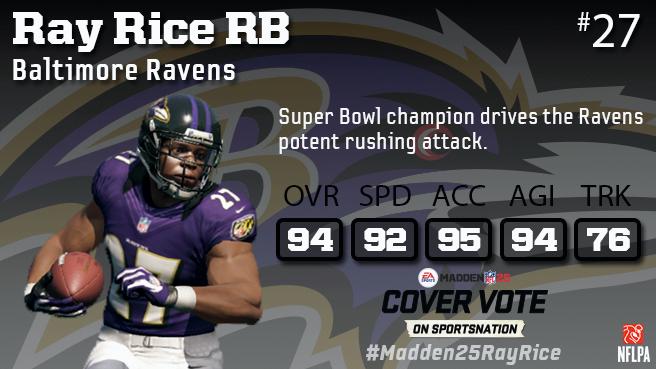 Baltimore Ravens Running Back Ray Rice was fired from all of NFL football on Monday after a video tape surfaced on TMZ showing him punching his now wife Jannay Rice and knocking her out in an elevator. The Ravens terminated Rice’s contract early Monday morning and NFL commissioner Roger Goodell suspended the 28 year old, “indefinitely”.

Backlash from the domestic violence incident has been swift and widespread.

A pizza parlor in Baltimore Maryland was quick to announce a promotion where fans could trade Ray Rice jersey’s for pizza. The Ravens announced they would buy back Ray Rice jerseys from their fans, similar to the way the New England Patriots bought back Aaron Hernandez jerseys when he was arrested under suspicion of murder.

Since it’s a “suspension” it is possible that Rice could return to the NFL, although it’s not likely.

In the meantime in the interest of the people EA Sports has decided to remove Rice from the Ravens lineup on their Madden 15 game that hit stores two weeks ago. EA Sports has said they will remove Rice in an update scheduled for Friday morning. They also removed Hernandez after his charges.

On games prior to this year it would be up to the player (game owner) to remove Rice from those lineups, but since Rice won’t actually be playing a Ravens game this season at all (he was suspended for the opener) EA Sports felt it prudent to remove him from game play.