Monsieur Is Like A Coke Freestyle Machine For Alcohol [Video] 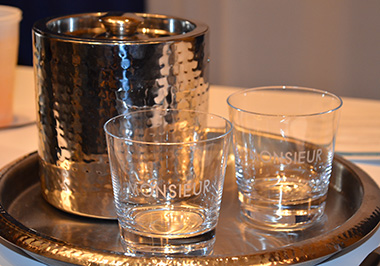 This has got to be one of the most incredible things we’ve seen in quite a long time.

We’re sure many people have gone into their neighborhood Moe’s or Firehouse Subs and seen the crazy Coca Cola Freestyle machine. The machine has 100s of combinations for your favorite soda and mixes them together magically, right before your eyes. Those who are adventurous have mixed strange concoctions of soda bliss.  Others, have probably thought to themselves, what if there was alcohol in that machine instead of soda? What if it could mix soda?

Well meet Monsieur, a machine developed by a trio of engineers in Atlanta Georgia as the first artificially intelligent robotic bartender.

It wasn’t a trip to Moe’s or Firehouse that prompted Monsieur CEO Barry Givens to come up with the idea for this incredible machine, but rather a trip to Applebees. Givens and his friends were in Applebee’s on a busy sports night, eating and hanging out at the bar. They seemed to notice that it was taking an unusually long time for their waitress to bring them their drinks. Instead of chalking it up as a consequence of drinking cocktails over beer, the guys began to analyze the situation.

What they found was that one bartender was serving everyone at the bar and then filling drink orders for servers who were responsible for the entire restaurant. They knew there had to be a better way, and that’s when the idea for Monsieur was born.

What came out of a successful Kickstarter campaign and production was actually a pretty elegant machine that would look great in a hotel lounge, a bar, a club or even an executive’s personal bar.

But the Monsieur team didn’t stop at the machine itself. They wanted to automate as much of the process as possible, so they added sensors, apps and wifi.

The app works in sync with NFC enabled sensor wristbands. Say you were holding an event where you pre-purchased drink tickets for your attendees, or were holding open bar for VIPs and not for regular attendees. Using the app the patron, or attendee enters their name and information and they’re given a wristband from an attendant.

That wristband is used to activate the Monsieur machine (see video).

From there the machine knows how many drinks the guest is permitted and won’t dispense anymore drinks once they hit their threshold. Monsieur President and CFO Don Beamer told us after a guest reaches their threshold the attendant can make sure they aren’t intoxicated and either authorize the for more free drinks, or allow them to set up a prepaid tab. 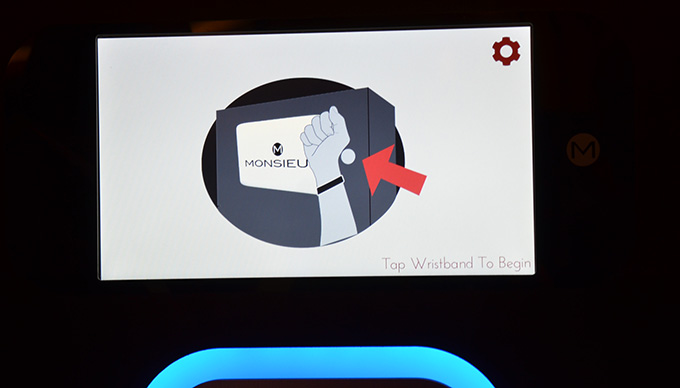 The Monsieur machine is smart, it uses an internet connection to keep up with the app as well as the latest cocktails. It can also give data points back to the Monsieur team and once they’re installed, the establishment owner. What cocktails are more popular, which one’s aren’t, what kind of alcohol is consumed the most etc. The possibilities are endless.

The Monsieur is perfect for hotel lobby lounge areas where it’s not cost effective to have a bartending staff. It’s also perfect for bars and clubs with VIP areas or as an overflow bar. We’re also pretty confident that Monsieur is going to find it’s way into several home bars. To that end the Monsieur team knows the sky is the limit. Down the road we could see the Monsieur machine tied in with home automation systems and your Grey Goose and Orange Juice can be ready the minute you walk through the door.