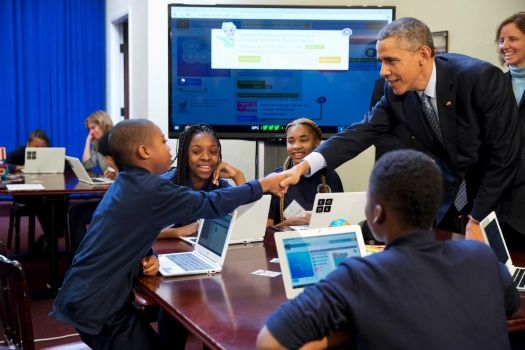 President Obama can add a new title to his resume, “Coder-in-Chief.” On Monday, President Obama hosted an Hour of Code event at the White House, an became the first president ever to write a computer program. Wired reporter Klint Finley had a very good write-up on Obama’s program and the significance:

It was a very simple program—all it does is draw a square on a screen—but that’s the point, says Hadi Partovi, co-founder Code.org, an organization that promotes computer science education. “All programming starts simple,” he says. “No one starts by creating a complicated game.”1

The event was one year to the date after President Obama took to YouTube to implore Americans to learn to code. Here is the short appeal:

In addition to being the anniversary of President Obama’s appeal for Americans to learn to code, it is also the annual Computer Science Education Week. Though I doubt that President Obama will opt for a career in coding anytime soon, it is encouraging that he is taking an interest in computer science education.