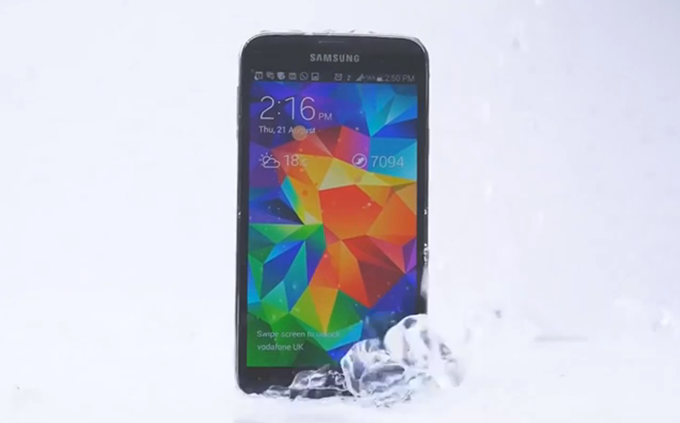 Now that just about every tech industry celebrity, CEO and investor has taken the ALS Ice Bucket Challenge, it’s time for the technology to get involved. At least that’s what the folks in Samsung UK’s marketing department thought.

It comes as no surprise that Samsung’s flagship Galaxy S5 can withstand the rigorous temperatures and water flow of the ice bucket challenge. It’s casing makes the phone submersible and able to withstand most normal environmental conditions.

Some of Samsung’s top tier smartphone competition, like the HTC One M8, and the Nokia Lumia 930 both tout their “water resistant” features. Samsung’s device is water proof though and it’s a feature that drove some early sales of the device.

Apple’s iPhone 5s and 5c make no claim about water resistance or water proofing. Typically a little rain won’t hurt it but drop it in a puddle and it can be one expensive decoration.

So with that in mind, along with the popularity of the ALS Ice Bucket Challenge, Samsung UK released this video of the Samsung Galaxy S5 taking the Ice Bucket Challenge. In the video the phone challenges the HTC One M8, Nokia Lumia 930 and the iPhone 5S. We don’t believe that any of the phones will respond.