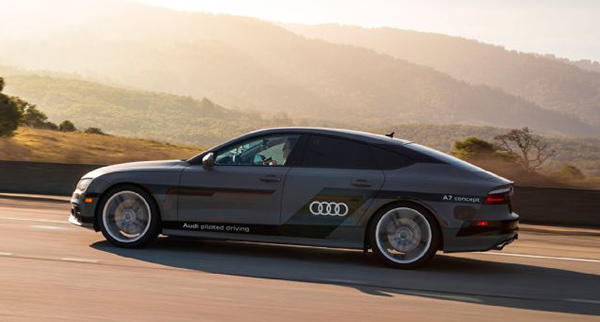 It’s not uncommon for the world’s top automobile manufacturers to show off a thing or two at the International CES just a week before Detroit’s big auto show. When cars are infused with technology it makes sense to get the press excited about a vehicle at CES ahead of the usual automotive press at the car show in Detroit

The 2015 International CES is no different. General Motors showed off the rebooted Chevrolet Volt Sunday in Las Vegas. In years past we’ve seen the new Mustang and even a Ford Bronco concept car.

On Tuesday, Audi’s A7 Sportback self driving car arrived in Las Vegas after a 560 mile journey through California.  The best part is that Audi let journalists get behind the wheel for the self driving experience and had a Audi certified pilot driver riding shotgun throughout.

The journalists and Audi team helped navigate, the self driving vehicle, who guys by the name Jack, from San Francisco to CES in Las Vegas.

While a self driving car may seem magnificent on the open California road, what really stood out for journalists was the cars ability to navigate in traffic, and even change lanes.

“The concept vehicle utilizes various production-ready sensors as well as sensors integrated into production vehicles today that accurately detect the vehicles surroundings.Adaptive cruise control (ACC) and Audi side assist (ASA) long-range radar sensors as well as mid-range radar sensors at the front and the rear of the vehicle that are directed to the left and right of the vehicle provide the vehicle with a 360 degree view of its environment. Laser scanners are integrated into the front Singleframe grille as well the rear bumper to provide additional detailed recognition of static or dynamic objects. The redundance of the sensor data constists of a continuous plausibility check during piloted driving to ensure the correct decisions are being made the vehicle and the driver. Four smaller cameras at the front and rear of the vehicle provide short-range information of the surrounding environment. The hi-resolution, wide-angle 3D video camera, which will first see production in the the new Audi Q7, obvserves the surrounding traffic surrounding the vehicle. The sensors utilizes is close to production and meets financial targets for inclusion into future products.

The concept relieves the driver of driving duties from 0 to 70 mph, or just over 110 km/h. The car can initiate lane changes and passing maneuvers as well as  accelerate and brake independently. Before initiating a lane change to the left or the right (on US highways), the vehicle adapts its speed to surrounding vehicles. If the speed and distance calculation is deemed safe, the vehicle initiates the lane change with precision and in a timely manner.” Audi said in a release.

The Audi A7 Sportback self driving car is on display this week in Las Vegas at the 2015 International CES. Audi is also showing off the interior of their newly designed Q7 and other technological advancements during the conference.