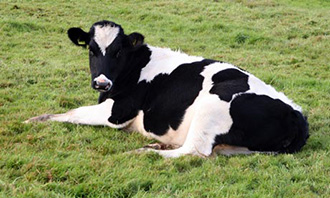 The internet of things is coming to everything under the sun. We’ve seen wristbands, watches, headbands, basketballs, and just about anything else you can think of when it comes to humans.

We’ve also seen an onslaught of new “internet of things” devices for dogs. Dog trackers can let you know when your dog is awake, asleep or when he or she decides to poop. So it really should come as no surprise that a Scottish company has created a wearable device for cows. Yes cows.

The wearable collars that Scottish company Silent Herdsman has created allow farmers to access data points provided by their cows and other livestock.

Venturebeat reports that the Silent Herdsman has received close to $4.9 million in venture funding from Scottish Equity Partners, Albion Ventures, and Scottish Investment Bank. The company says they will use the funds to fuel their growth and international expansion.

While you may be laughing right now, as we were when we first read the initial report, sensors and technology are big business for farmers. Martin Lowe a farmer in Georgia told us that technology is making it easier to manage farms with scaled back staffs. “sensors make a lot of sense when managing large herds of cattle” Lowe told us. “I’ve also seen in magazines where farmers are using drones to manage large amounts of crops.”.

The Silent Herdsman collar can monitor a cows sleeping patterns, along with when they are moving about. It can also alert farmers via their smartphone, tablet or computer when a cow is oestrus, or lactating.  The hardware, combined with the Silent Herdsman’s analytical software, can let farmers know when the cows are at their best, and when they are ready to be milked.

“There are currently over 1 billion beef and dairy cows worldwide and over 34 million dairy cows in the European Union and U.S. alone,” said SEP partner Stuart Paterson in a statement. “This number is continuing to grow as countries get wealthier and demand for dairy products increases. As a result, this represents a market opportunity of over $1 billion per annum to Silent Herdsman. Moreover, the solution significantly enhances the efficiency of world food production, which is of global concern. The company is rapidly making sales both in the United Kingdom and internationally, and as a result, SEP is delighted to support the company’s growth plans.”