One of the most interesting products that we had a chance to see at the 2014 International CES was the SlimPort technology, from the Analogix Semiconductor company. SlimPort is a fairly new technology that is built into the Micro USB port on smartphones and tablets. SlimPort has yet to achieve any sort of widespread use in device manufacturing, but its use is undoubtedly growing. Currently, the list of devices that utilize SlimPort technology is fairly small, but includes offering from major brands including: Google Nexus 4 & 5, the LG G2, and the HP Chromebook 11. 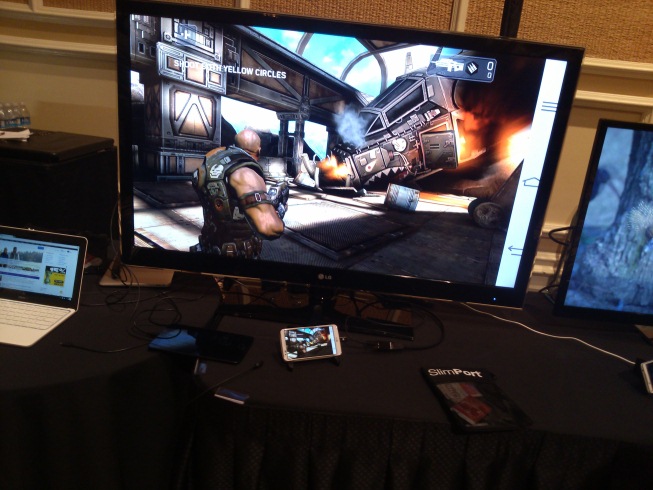 SlimPort technology enables smartphones, tablets, or computers to deliver content – be it audio, video, or gameplay – to an external display. The SlimPort website expands on the technology:

SlimPort® products offer the unique ability to connect with all the leading display types (HDMI, DisplayPort, DVI and VGA) over a single cable. They also offer high-bandwidth 3D 1080p video playback, low power consumption and compatibility with the Mobility DisplayPort (MyDP) standard, with future video resolutions up to 4K.

So essentially, you can connect a mobile device to a display and view the exact same content on said display. While this is not a new concept, the clarity and definition with which the SlimPort transmits to an external display is astounding. The image above gives you some idea of the capabilities, but it must truly be seen in action to appreciate it. Here is a demo video of the SlimPort’s capabilities:

It makes a lot of sense. Often, the processor and computing power inside of a smartphone or tablet greatly exceeds the capabilities of the device’s screen. While a phone may have a 720p display, the processor inside is capable of 1080p.

While such high-definition display often uses and incredible amount of device power, the SlimPort is battery friendly. Again, I will defer to the company’s description:

SlimPort® products work without external power, and their low-power designs help your mobile device batteries to last longer. You can even charge your batteries during playback when using DisplayPort and HDMI adaptors.

If your device has SlimPort technology, all you need is and HDMI or VGA adapter, $29.95 and $24.95 respectively, to use the display capabilities. The SlimPort is a major advancement for mobile display technology, but it has yet to really catch on. I, for one, hope that all new mobile devices will utilize the SlimPort.