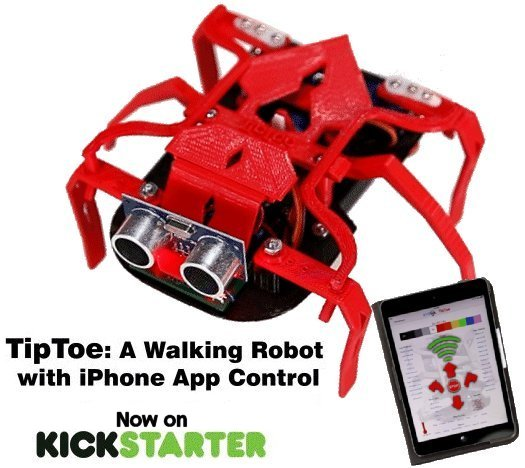 We cover a lot of crowdfunding campaigns here. A lot of these are pretty cool. However, we just came across one of the cooler campaigns we have seen it a while. This is the TipToe Robot, from XYZbot:

The TipToe robot is a great, easy to use, introduction to robotics. According to the team, the kit takes about 30 minutes to set up. That said, though the kit is incredibly simple to set up and get started, it is Arduino compatible, so you can customize it like crazy. Here is a good overview description of the TipToe from XYZbot:

Introducing TipToe, a walking insectoid robot with iPhone App control. TipToe is a new robot being developed by XYZbot. TipToe has 6 legs, LED eyes with changeable color (RGB LEDs). The robot comes as a kit of parts which you assemble in about 30 minutes. Then download a free iPhone app, switch TipToe on and start walking. Forward, Backward and Turn motions are possible. Add on modules allow you to upgrade TipToe to add a speaker to have him beep sounds, or add a sonar sensor or temperature sensor for ranging.1 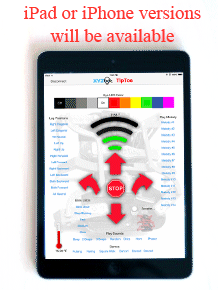 Perhaps the best part of the TipToe is its controls. Beyond simply moving, the mobile app allows you to do all sorts of things with the TipToe, “Moving is accomplished by pressing the red directional arrows. The LED eyes can be changed by clicking on the colored squares at the top of the interface. Sounds and melodies can be played by pressing the appropriate sound at the bottom of the interface or a melody listed on the side. Finally, you can even control individual leg positions listed on the left side to create your own fun walks!”2

On top of all these awesome features, the kit is pretty cheap, coming in at $99.