On Thurday, May 22, T-Mobile crossed a meaningful threshold. T-Mobile has overtaken Sprint as the number 3 Smartphone buyer in the U.S. This follows the recent line of T-Mobile’s user acquisition strategy, using “aggressive discounting to add more new subscribers than any other U.S. wireless operator.”1 According to Reuters, T-Mobile bought a total of 6 million smartphones in the first quarter of 2014, surpassing Sprint’s 5 million.

T-Mobile has been steadily rising amongst the major U.S. carriers. At the beginning of May, T-Mobile said they added 2.4 million net subscribers and 1.3 million post paid subscribers, drastically outpacing Verizon Wireless and AT&T. Further, in April of 2014, T-Mobile was ranked as the number one carrier, in terms of customer value perception: 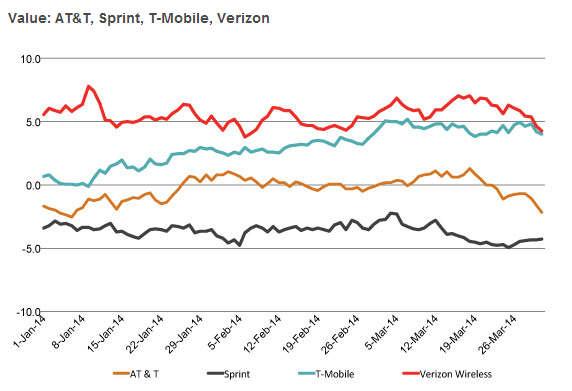 It is quite clear that many of T-Mobile strategies are beginning to pay off. By focusing on the customer, as opposed to the bottom line, T-Mobile is slowly, but surely, creeping up the list. Although T-Mobile still trails Sprint in total subscribers, the numbers show that T-Mobile’s price cuts and promotions are working. At this point, it only seems like a matter of time before T-Mobile jumps ahead of Sprint in all aspects.