Whisper: When Anonymity Is Done Right 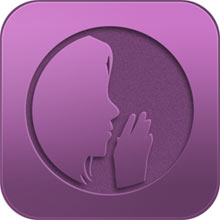 Do you use Whisper?

Loosely, Whisper is an app that features thousands and thousands of personal memes. These aren’t the funny kind that get posted in your Facebook feed 100 times a day. They are often more “real”. Sometimes Whispers are thought provoking, and sometimes they are just odd.

That’s all because Whisper gives users the freedom to express themselves anonymously, a word that’s often the plague for many other websites and mobile apps.

Take Formspring for instance. Formspring was the question and answer app that allowed users to ask other users questions behind a cloak of secrecy. A few years back during it’s heyday I had an intern working for me who was a freshman in college. The intern was actually a family friend who I had seen grow up and probably babysat a few times as a young adult.

Now let’s call my intern/family friend Lauren. She started college and interning for me at 18 years old and now at 21 she is still quite the looker. A very attractive, smart young woman. But in all seriousness she probably looked all of 15 or 16 when she was interning. We were poking around Formspring and she set up an account. She used a profile picture of her and her friends celebrating senior week after high school graduation at the beach. With that as her profile picture (and probably not the greatest one to go with ) she was propositioned 6 ways to Sunday around the clock. Some of the questions people asked he would make hard porn look soft.

Of course there were terms of service and a support desk and all that but, that kind of smut and of course just publicly disgracing someone on other platforms like Juicy Campus (which is of course gone), are why anonymity typically doesn’t work.

That’s not the case for Whisper. Michael Heyward, the company’s CEO goes to great lengths to both protect their user base’s anonymity and insure respect and quality content. After all you can be who you really are with the lights off.

And with that in mind, Business Insider, shared a great example of why Whisper works. Heyward sometimes teaches at USC. It was during one of those classes that he asked all of the college students in the room to raise their hands if they were virgins. Of course not a hand went up. He then asked them all to put blindfolds on and turned the lights off at the same time. When he asked the question again, half of the room raised their hands.

After spending some quality time on Whisper, it’s almost like those few friends you have on Facebook. You know the ones who post status updates like “this is the worst day of my life”, or “I hope I never talk to him again”. Extremely vague status updates that draw curiosity from others. Most quickly right it off as an attention plea, but for many people it’s just the ability to halfheartedly get something off their chest. Whisper allows that person to actually go in a little deeper and share it with an entire community without the need to start a gossip train.

Sometimes Whisper users use the app for things that make perfect sense, things some might respect but others may be offended by. Take this whisper from some member of our armed forces. This soldier would probably be chastised on Facebook for making such a blatantly obvious and good point. 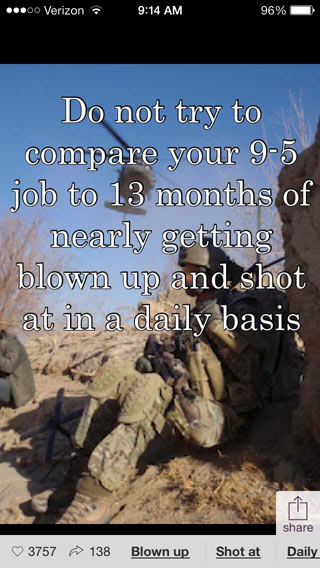 Or that about this one from a dad obviously concerned about his daughters safety. Gun control freaks would freak out on his Facebook, friends may even call child protective services. Again, nothing bad or earth shattering here. 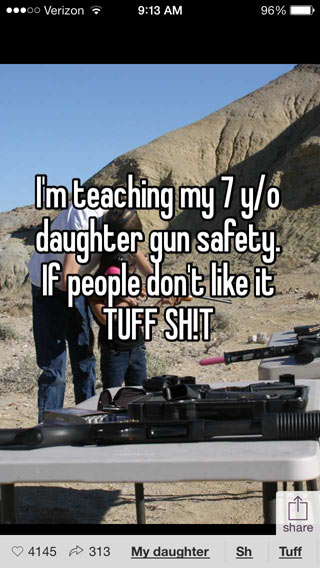 And then there’s this one, again probably true, in fact it probably happens all the time. This person wants to admit it but can’t do it in public. 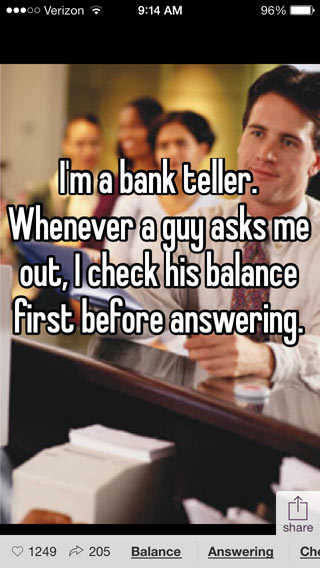 Of course there are more intimate whispers like the woman who says she’s lying in bed with her boyfriend but feels so alone. Or the one that says they are afraid to come out to their parents but the boyfriend/best friend is watching football with his dad.

Whisper can be used for all kinds of things and for the most part it stays  rather tasteful. That can be a hard thing to do when managing a site/app that’s approaching 3 billion page views. And people who download whisper don’t just check it once a day, they’re back 8-10 days and sticking around for 20 minutes. Those are some pretty impressive metrics.  Add to that the fact that the average user is between 17-28 and you have a recipe for a successful social platform.

Maybe there was something in the water, Business Insider reports that Heyward grew up in Los Angeles and attended the same high school as SnapChat founder Evan Spiegel. Of course snapchat is designed for privacy as well.

If the metrics, graphics, and looks into people’s intimate lives aren’t enough of a good selling point for Whisper, perhaps the fact that multiple users have said the app saved their lives does.

Download whisper in the iTunes store by clicking here.