Android Is For Poor People? The Elephant In The Room.

Numbers don’t lie they say, and map’s don’t either, (unless of course you’re Verizon says T-mobile CEO John LeGere). In this case a story has surfaced this morning courtesy of our friends at Business Insider, that when we saw the initial headline it was shocking; These Maps Show That Android Is For People With Less Money.

I’m pretty confident that BI’s Jim Edwards was going for the most politically headline for a story that logically makes sense but people don’t like to mention, at least not within ear shot of anyone else. “Android is for poor people”.

Actually Android is for all people, people with less money to blow on the latest smart phone seem to be a substantial subset of those. This is really no surprise to anyone, but thanks to a social mapping company called mapbox.com, they’ve put it into a map, so a) it must be true and b) it’s visual now.

In the overall scheme of things there are way more Android phones across the globe than iPhones. It’s just in the US iPhones are winning.

The why is really simple.

There are over 11,580 devices running Android. In comparison there are 14 total iOS devices ever made. With that huge number of Android devices there are very high end devices like the HTC One, forthcoming HTC One M8, Samsung Galaxy 1, 2,3, 4 and 5, devices from LG, nexus phones and many more. These devices either top the current iPhone or had before the release of the latest iPhone. Even Apple co-founder Steve Wozniak has said on multiple occasions that Android gets the newest features first, and too many Apple just does them better, after more research and time for iteration.

But even with all of these high end Android devices out there, the bread and butter for Google’s operating system is the low end market that wants smartphones but doesn’t want to shell out the money for the shiniest new $500-$600 iPhone. With the wireless carriers quasi eliminating hardware subsidies it’s actually harder for those with out a lot of disposable income to get their hands on an iPhone. There’s also the sales rep in the wireless store who finds out what the customer is working with when it comes to funds, and they aren’t going to lose that sale or that data plan. If the customer can’t afford, or choses not to spend the money on the iPhone, the sales person is selling them into a shiny new Android phone, some are still even free. 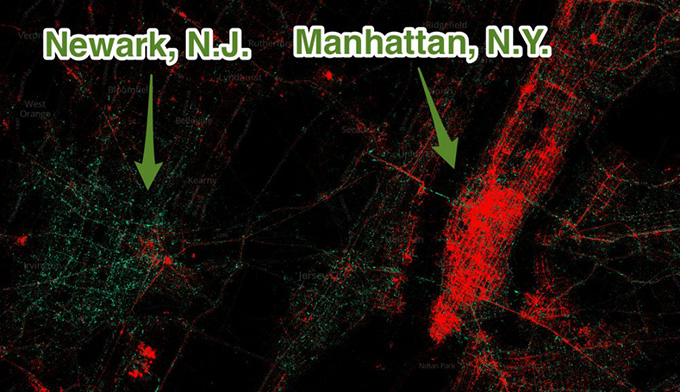 As for the data set from this morning, the maps from mapbox.com show that Newark New Jersey is popular with Android while Manhattan is swarming with iPhones. To back the argument, Manhattan has a median income of $67,000 while Newark has a median income of $17,000. Even within New York City the map shows that the more affluent neighborhoods like the West and East Village have three times the amount of iPhones as Chinatown and the lower east side. 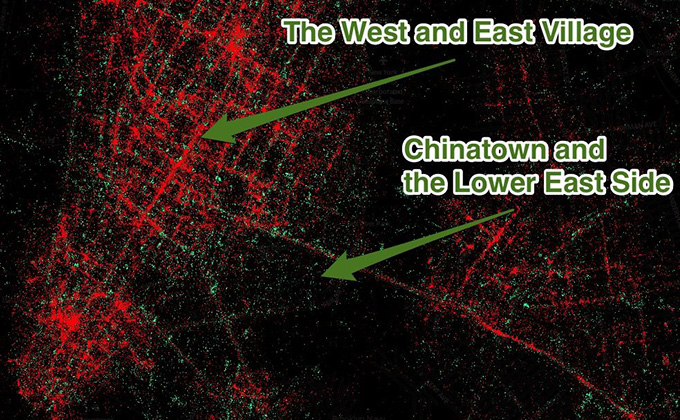 Well speaking of sales Business Insider also used data from e-commerce tracker Monetate to show statistics that are inline with the theory.

The interesting thing in these e-commerce numbers is that Android phones had a higher ticket item cost with Android coming in at $136 and iPhone at $126.

With all that in mind, there are still several factors to consider. Perhaps iPhone has a more affluent tech savvy and social user and several Android users are still using their phones to talk, text and check email. The data set was from Tweets that identified as iOS or Android.