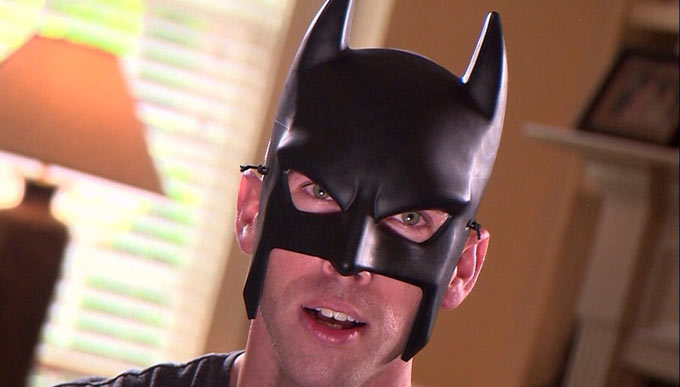 Parents across the country shed a tear earlier this week when Blake Wilson posted the vine below.

Wilson is the Georgia dad who has taken to Vine offering six second parental anctedotes wearing a Batman mask and turning on a gravelly Batman voice. Wilson offers a break from the prebuscent viners who have all but taken over Twitter’s six second video platform. America has fallen in love with Wilson and has family, wife Jen included who often times appear in his Vine videos. Some of the cutest videos feature Wilson’s youngest child, his son Ben, trying to emulate has dad’s alter ego. Others loved hearing Wilson’s daughter Sienna flip through a picture book and say the word “colors” with a pseudo British accent, wondering is she the daughter of BatDad or Austin Powers. It was that particular clip of Sienna, that had thousands of BatDad’s two million Vine followers wondering had he quit the platform. In the comments one person had said they hoped the child would die. This caused an uproar of support for the masked super dad. BatDad’s vines are simple looks into the life of being a dad. They started off with simple little parenting tips like flushing the potty or eating. One Vine showed Wilson telling Ben that tables were for glasses and not asses. Wilson has risen to popularity appearing on the Today Show, in the Huffington Post and several other high profile media outlets. Over the past few weeks Wilson has come up with some great Bat training Vines which show the youngster practicing to become a super hero himself. Batdad has two distinct purposes in the social landscape of Vine. First and foremost he’s showing other dads (and moms for that matter) that being a dad can be cool. Some commentors have admitted to using voices and characters to teach life’s little lessons, modeling after Wilson’s character. The other purpose, at least for Vine, is showing how creative one can be in six seconds without twerking, or performing for a gaggle of other teenagers. As for BatDad, Wilson posted this Vine on Thursday and made a note of 1/31/14 indicating something significant was happening today.

After another outcry of fans, worried that Batdad may officially sign off of the platform, flooded the official BatDad Facebook, Wilson responded that he wasn’t quitting and that something special would happen today.