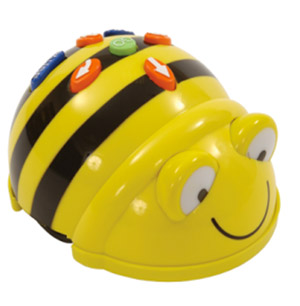 There are a lot of companies out there making a name for themselves by saying that they are teaching kids how to program in a very short time. At ISTE 2014 we actually saw it happen when Terrapin Software taught our six year old special correspondent, Tatum, the fundamentals of programming in under ten minutes.

Terrapin publishes  the Logo language and products based on the Logo philosophy of learning by doing. Programming begins by taking projects and breaking them up into parts and then solving them step by step.

When Tatum arrived at the Terrapin Software booth at ISTE 2014, company President Bill Glass presented Tatum with a bumble bee robot that was resting on a game board of sorts on a spot marked “Wet”. Tatum needed to get the Bee-Bot robot to the word’s opposite, obviously dry. After establishing she knew the answer she had to break the trek into steps from wet to dry. You see this in the middle of the video below. 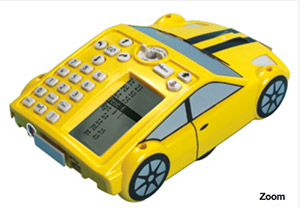 Tatum counted off three blocks forward, a right turn and another right. Those moves would hopefully get the Bee-Bot from wet to dry.Unfortunately if you look closely at the board it’s actually three blocks forward a right turn and one block forward. On her second try she got it right. Then she was able to solve the rest of the puzzles the same way.

Sure this is easy enough but Tatum is six years old and had never experienced any kind of programming before.

Terrapin offers the Bee-Bot for $89 and also makes several game mats. There’s letters, numbers, opposites, even a mat that has you program the Bee-Bot to drive around roads from point A to point B.

The Bee-Bot is obviously great for problem solving, the earliest fundamentals of programming and critical thinking.

Bee-Bot breaks down the skills of sequencing, estimation, and problem solving. It also provides endless hours of fun. Then, as children outgrow Bee-Bot, Terrapin offers the Pro-Bot which is a turtle robot shaped like a race car. Pro-Bot offers simple Bee-Bot functionality with arrow buttons just like the Bee-Bot does but it also dives deeper into programming sequences and more.

Pro-Bot can be used with mats the same way Bee-Bot is used, it can also be programmed to move in different way allowing students to easily transition from one mode to another as they master the skills.

Pro-Bot can also hold a felt tip marker, with that users can program Pro-Bot create shapes and draw pictures.

You can find out more about Bee-Bot and Pro-Bot at Bee-Bot.us