BootstrapBay: A Marketplace to Buy and Sell Bootstrap Themes

With all the different tools and frameworks available to developers and non-developers alike, it has become incredibly easy to build a website; not necessarily a quality site, but a site nonetheless. As platforms like WordPress, Tumblr, Blogger, and others have become more mature, you can pretty much get a website up with little to no work. However, one of the most flexible frameworks has not received the same amount of love as the others: Bootstrap. Though, yes, Bootstrap is growing in popularity, it is nowhere near as popular as the three mentioned above. Perhaps the main reason for the relative lack of prominence is the simple fact that Bootstrap requires a bit of work; at the same time, this is the reason that Bootstrap has begun to rise in use.

In a nutshell, Bootstrap is a bare-bones framework that places a premium on responsiveness: “Bootstrap easily and efficiently scales your websites and applications with a single code base, from phones to tablets to desktops with CSS media queries.”1 Bootstrap was originally developed way back in 2010 at Twitter. Two Twitter employees – Mark Otto and Jacob Thornton – built Bootstrap out as a way to create a consistent UI across internal tools. However, seing the huge potential, Bootstrap was soon released to the public:

Prior to being an open-sourced framework, Bootstrap was known asTwitter Blueprint. A few months into development, Twitter held its first Hack Week and the project exploded as developers of all skill levels jumped in without any external guidance. It served as the style guide for internal tools development at the company for over a year before its public release, and continues to do so today.2

While Bootstrap itself is incredibly flexible, the less design-focused have been slow to adopt the framework. A lot of this is a result of the lack of a huge repository of pre-built themes. There just aren’t the number of theme marketplaces out there for Bootstrap as there are for, say, WordPress. However, we had a chance to speak with the creators of a new Bootstrap theme marketplace: BootstrapBay.

BootstrapBay is, firstly, a marketplace for themes and templates. However, the company has taken a unique approach to growth. Rather than simply focusing on building out a marketplace, the founders have placed a huge emphasis upon building out an engaged community. Christopher Gimmer, one of the Co-Founders of BootstrapBay, told us a little bit about the user/community-first approach:

Unlike most marketplaces, we enable theme authors to sell their themes non-exclusively while still earning high payment rates. We also provide a lot of value to web designers and developers through our blog by posting tutorials, tips and resources. We’re not just building a marketplace, but an entire community.

While this is a unique and useful approach, it certainly helps that there are a ton of great themes on BootstrapBay. Browsing through the themes, it looks like the most expensive one is only $16, making BootstrapBay incredibly affordable. Compare that to WordPress Themes on Themeforrest where the cheapest theme is $25. 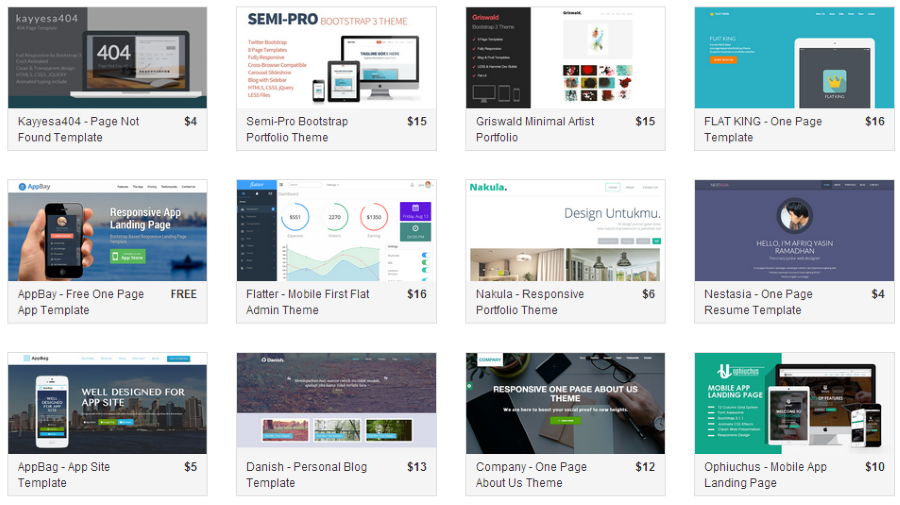 Christopher told us that their main goal is to continue to build out the user-base and the marketplace. However, he also told us that they plan to expand into WordPress themes built off Bootstrap in the very near future. If you are a Bootstrap designer, check it out, it is really simple to get a theme up for sale.