Yes Cards Against Humanity Was $5 More On Black Friday, And Yes It Worked. 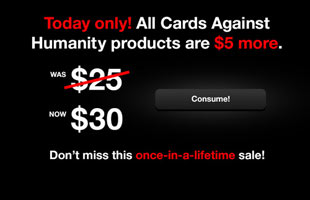 Black Friday, the day where millions of Americans bust the doors down at their favorite big box store to get the best deals on a brand new TV, pair of headphones or a laptop, has been all we’ve heard about over the last few weeks. Who has the best deal? Who has the best bargain?

Well it surely wasn’t Cards Against Humanity, but that doesn’t mean they didn’t do well. Cards Against Humanity is the fun party game enjoyed by people everywhere. The adult game has cards that players must use together to form the most insanely crazy, or worst against humanity, set when it’s their turn. The game is enjoyed by all types of people, but was a big hit in back rooms and hotel parlors at SXSW last year.

The game was designed by Max Temkin, a Chicago area designer who’s done work for the likes of Barrack Obama in addition to his side hobby of making hit games. He’s designed for a wide range of clients including politicians, non-profits, conferences, games and large brands. Temkin is widely praised for his out of the box, against the grain thinking, and his wild stroke of creativity.

That’s why he’s never been into the tradition of Black Friday. Temkin said on his blog Maxisentialism, that Cards Against Humanity is $25 it’s always $25 and will always be $25. But as Black Friday rolled around he started thinking about what to do.

Temkin’s initial idea was a $0.01 coupon off. “I liked the idea, but have always maintained a policy of no deals, no discounts, and no sales  for Cards Against Humanity, even during our Kickstarter. To me the game is always $25, it’s never another price, and doing any kind of deal or discount undermines the simplicity and honesty of the game.” he wrote on Maxisentialism.

That’s when he turned to his co-creator Ben Hantoot who had the crazy idea to actually charge more on Black Friday. ” I fell in love with it instantly.” Temkin said.

So Cards Against Humanity’s Black Friday deal was on. For one day only you could pay $5 more for the game. And it worked.

Cards Against Humanity started trending in the news. The initial story was picked up by The Guardian, USA Today, AllThingsD and many other great sites. The story was even the top post on Reddit. While sales didn’t skyrocket, Black Friday was their second largest day in November compared to November 21st when they launched their fourth expansion pack. 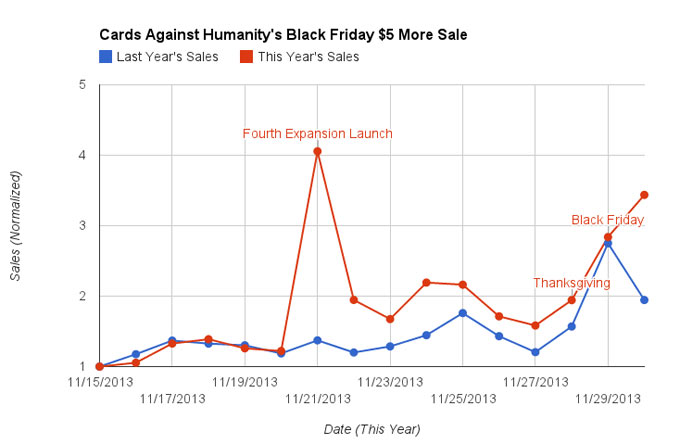 According to Temkin they did a little better than last year’s Black Friday. He believes it’s because people’s decision’s weren’t necessarily affected by the $5 increase.

People who were buying Cards Against Humanity as a gift may not even realize they paid more than normal. The company did receive another uptick the Saturday after Black Friday when prices went back down to normal.