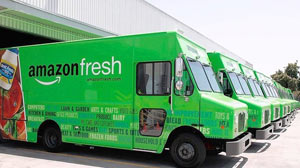 No the Amazon drone delivery isn’t ready yet, however The Verge is reporting that the e-commerce king is preparing to launch it’s Amazon Fresh grocery service in San Francisco, possibly as early as next week.

Amazon initially launched their grocery service in Seattle and Los Angeles. A report from AllThingsD says that Amazon’s green trucks, which deliver groceries to customers the same day or the next day, have been spotted in San Francisco. However, mums the word from the official Amazon camp. An inquiry from AllThingsD warranted a we have “nothing to share” response.

Amazon Fresh costs $299 per year and bundles in Prime so customers that order groceries can also pick up a flat screen tv, and a few pairs of boxer shorts.

AllThingsD has pegged next Tuesday, December 10th as the day that Amazon Fresh will launch in San Francisco, citing an unnamed source.

Amazon founder and CEO Jeff Bezos recently talked to 60 minutes about Amazon Fresh saying that the reason it took so long to launch was that the company needed to figure out “How to make it make financial sense,” Bezos said. “What’s not to love? You order the groceries online, and we deliver them to your door. But that’s very expensive.”

AllThingsD’s Jason Del Ray suggests that Amazon doesn’t need to make money on Amazon Fresh they just need to make it so the service doesn’t lose money. The hope is that people will become accustomed to using Amazon for their weekly grocery run which will in turn offset the cost of other customers who use the service more sporadically.

Amazon has started opening gigantic warehouse facilities called “fulfillment centers” in major metropolitan areas. They opened one such center a year ago in San Bernadino California.

In October Amazon announced that they were opening a 1,000,000 square foot distribution facility on the property of an old General Motors plant in southeast Baltimore. Although the Baltimore Sun did not report that the facility there was for Amazon Fresh, Amazon spokeswoman Kelly Cheeseman told the paper that they chose that site because of it’s proximity to a large customer base. There is another, traditional Amazon distribution center 70 miles away in Delaware.

“We want to make sure a fulfillment center is placed as close to the customer as possible to ensure we can offer a great Prime service and good shipping speeds to customers,” Cheeseman told the Sun.