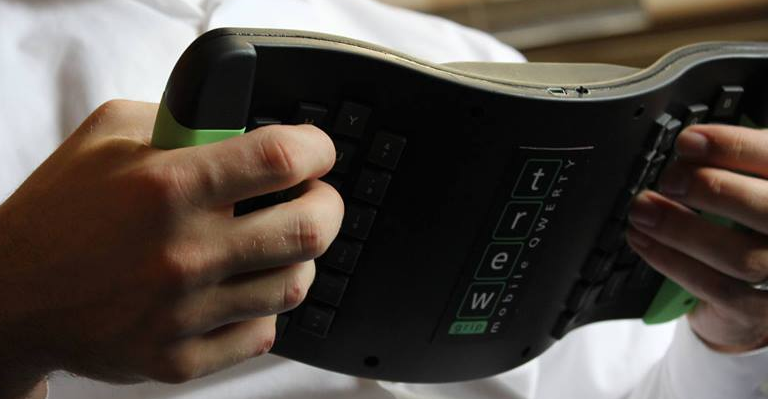 This strange looking device is the TREWGrip mobile keyboard. Their website describes the device as, “TREWGrip is a handheld “rear-typing” device and air mouse for your mobile technology, smart TV and desktop.”1 The TREWGrip maintains the familiar QWERTY keyboard layout, but the keyboard is split and rotated so the hands gripping the devices can also perform multi-finger entry. Further, the mobile keyboard also provides visual cues to the user in the form of a second non-usable keyboard; when a typing key on the back of the device is touched, the corresponding visual key lights up on the front.2

Although the keyboard looks a little intimidating, the makers of the keyboard argue that the learning curve is similar to that of split-keyboard:

The learning curve for TREWGrip is virtually the same as a split fixed-angle ergonomic keyboard, or approximately 90% of the user’s typing speed after 10-hours of use. This is because learning TREWGrip only involves physical learning, whereas other methods of typing that deviate from the QWERTY key layout involve some combination of physical and cognitive learning.3

In late July of 2013, TREWGrip held a typing competition (Cincy Typing Challenge – which was actually the public launch of the product), the results of which speak to the above quote. There was both a keyboard and typewriter competition, with the fastest four from each advancing to the finals. For the finals, however, the contestants had to use the TREWGrip keyboard. The contestants were given several hours to adjust to and practice with the TREWGrip. The eventual winner, Robert Price, qualified in second place in the keyboard segment of the competition with a typing speed of 137 WPM. In the finals, after only using the device for several hours, Price’s WPM with the TREWGrip dropped by only 22, to 115.4

You can find TREWGrip at CES in Eureka Park booth 73412.

Below is a quick video recap of the finals, as well as an intro to the product: