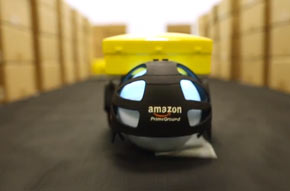 Amazon manages to find themselves in the news all the time. Luckily for the largest e-commerce company in the world, it’s often good news. Sometimes, it’s out of this world news, or at least off the ground news. Like when Amazon founder and CEO Jeff Bezos announced two weeks ago that he’s exploring the idea of drone delivery for same day purchases, nearby to a distribution facility.

Yes, Bezos was absolutely serious, and yes Amazon sees in their close future the ability to ship lightweight packages via unmanned drones right to your front door.

That may take a little bit of time for approval, perhaps not as long as this flying car, but their could be some hurdles.

No worries though because Orbotix, the Denver based company behind the app controlled Sphero Ball has the answer for you. As Business Insider reported on Monday, you can get your packages delivered via Amazon Prime Ground with the assistance of a GoSphero ball.

For those readers of ours that didn’t seem to understand that this video of  Microsoft Glass was a parody, lets be clear here, the video below, by Orbotix, is a parody of sorts, but really it shows off just how bad ass the Sphero ball can be. The Sphero ball would actually make a great holiday gift and you can pick one up right now at Target or by clicking this link.