Chat with LunchTable [One Spark Preview]

Matt Baer is a software engineer and entrepreneur and his goal is to make communication easier. Enter LunchTable, an android based chat app that he started working on during his college days at Radford University. The story behind the name of his app is a relatively simple one:

In college I developed a group communication tool called “LunchTable,” a title alluding to the daily gathering of a close group of friends in an otherwise public place. While group projects and clubs called for a communication platform like this in school, I saw a place for artists, travelers, startups and strangers to converse. 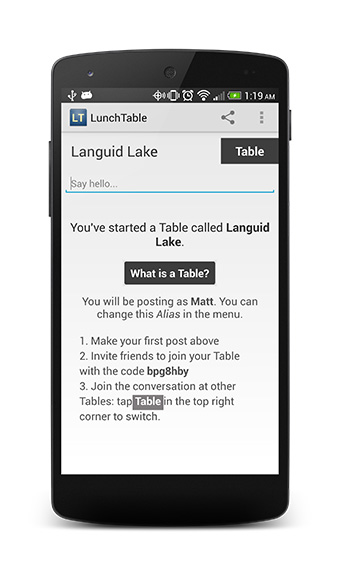 Currently LunchTable is still in the prototype stages but Matt is hoping that with feedback and insights from the OneSparkers will help him improve his current Android version and to bring his messenger to the web, Windows, Mac, Linux, and of course iOS.  They are planning to demo their product at the Hemming Plaza venue of OneSpark in which they will show off the PC based version on laptops, have the app on their phones, and they will be giving out free swag. Matt and his team will also be encouraging people to download the app for their Android phones and join in with other event-goers.

There really are a ton of chat based apps out there, though.  What makes LunchTable different?

We’ve noticed, between infinite pages of friends talking about themselves and photographs asking you to “like” them, the internet can be an alienating place at times. So we try to put the inter- back in interwebs by having all interactions take place at “Tables”–or groups–where you’re surrounded by others. No matter what, you’ll be in a conversation from the start, and this is what makes real interactions happen.

Our concerns for privacy and anonymity also contributed to our no-signup messenger. We’re committed to not collecting any more data than we need to get your message from A to B. It’s the way we like things

With their high value on anonymity their app will most likely be a hit with those that place a high value on their own personal privacy. We will definitely be checking out LunchTable this year at OneSpark.

Check out more of our OneSpark coverage here.