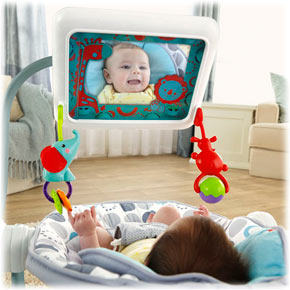 The Newborn to Toddler Apptivity Seat for iPad, from Fisher Price, seems like a reasonably cool idea. An iPad is mounted above the child’s head so they can enjoy videos, music and even apps when they’re old enough. The seat looks like a normal “grow with me seat” and features a toy bar with plastic toys to spin around before you get to the arm that holds the iPad. Don’t worry the iPad is mounted in a mirror type mount where the iPad can’t fall.

Fisher Price has even created apps specifically for use with this product. There are a variety of apps for all ages, and parents are encouraged to choose the age appropriate apps that will stimulate your baby and capture their attention.

Infant apps feature soft, colorful patterns the baby can watch. As the child gets older numbers, letters and words are introduced as well as the ability to interact. The apps are set to time out after 10-12 minutes so  you can control how long the baby spends in front of the iPad.

Even with the time out feature though, a Boston based child advocacy group called Campaign For A Commercial Free Childhood, have started an online petition urging Fisher Price to take the seat off the market. The group says that it’s not healthy for a baby’s development and encourages parents to leave the baby alone.

“The seat is the ultimate electronic babysitter. Its very existence suggests it’s fine to leave babies all alone with an iPad inches from their face,” said Susan Linn, the group’s director, in an interview. “Babies thrive when they are talked to, played with and cuddled, not when they are alone with a screen.”.

Fisher Price responded to the group by saying it was a niche product and only available online. They also pointed out the time out feature so that baby’s aren’t stuck watching endless video.

The group has the American Academy of Pediatrics on their side though. The ACP discourages electronic screen time for infants and toddlers under two. The ACP cites research that found infant videos can delay language development.

There is also precedent in another case involving the Campaign for A Commercial Free Childhood. In 2012 the Federal Trade Commission agreed with the organization, that the developer of “Your Baby Can Read” lied when it promised consumers that it could teach babies as young as 9 months to read. The company behind the software had to pay a $185 million dollar settlement imposed by the FTC.

Fisher Price makes no claims about educational value in using the seat.