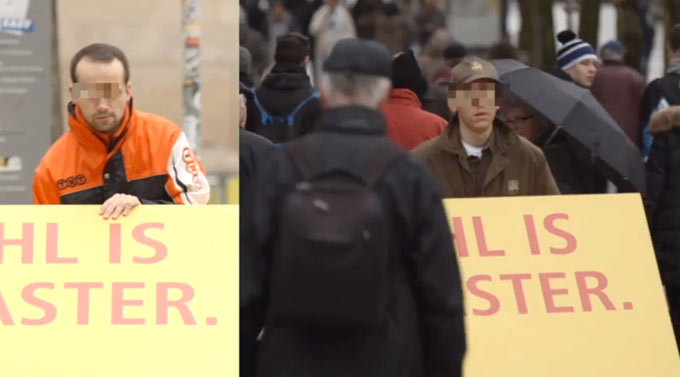 Thermal activated ink is some really cool technology. The ink disappears when it’s extremely cold and then re-appears and activates as it warms up. Thermal ink has been around for years but it wasn’t until now that world-wide shipping company DHL realized the value of it, in advertising.

Although it’s rather low-tech, what DHL did was rather cool.

DHL is a world-wide shipping company like UPS and Fedex. In markets overseas, especially in Europe it’s extremely popular. You’re more likely to see a yellow and red DHL uniform than the purple and orange of Fedex or the brown of UPS. But that doesn’t mean DHL doesn’t want to continue to solidify their position.

Online e-commerce sites, especially Amazon, have helped pick up the delivery and logistics business and as Gizmodo reports, competition is getting fierce.

Before the other carriers picked up the boxes they were treated with thermal-activated ink. Using the special ink DHL painted each box their trademark yellow and with red ink wrote “DHL IS FASTER” in big gigantic letters across the sides of the boxes.

Until the boxes were scheduled to be picked up they sat in a freezer as to not activate the ink. Once picked up the boxes went into the back of UPS and TNT trucks where they thawed and the coloring and lettering were exposed. In some instances the drivers didn’t even realize that the boxes said “DHL IS FASTER” on the side. Even if they had, the boxes were paid for legitimately and sent to actual addresses. For added fun DHL used addresses that required a bit of walking through highly populated areas.

The video of the stunt is hilarious. Watch below as UPS and TNT delivery men advertise for DHL.