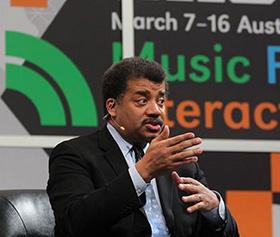 I must say that Dr. Neil Degrasse Tyson is probably one of the smartest people I’ve ever met in my entire life. Now most people say that about somebody who they meet that’s really sharp or maybe a tech company founder that had a strong idea, no Dr. Tyson is like Sheldon Cooper smart, and witty as well.

Tyson was on hand at SXSW Interactive on Saturday to talk about his show Cosmos, amongst other things. Cosmos is a remake of Carl Sagan’s 1980’s version and was picked up by Fox and debued Sunday night. Fox is distributing Cosmos to 170 countries making it the largest television rollout of a new series in the history of network television, that’s 169 more countries than American Idol.

What struck me about Dr. Tyson’s discussion was that he wasn’t just pimping Cosmos to the crowd at SXSW Interactive. He also didn’t talk over everyone’s head, the way many uber smart people do.

In a pretty laid back discussion he talked about what Cosmos meant for him. He hopes that when viewers watch and get into the program they will walk away saying, “Now I know and understand my place in the universe.” Of course the show talks about space but it also shows how everything connects in the universe.

Speaking of everything in the universe that was basically the topic of Dr. Tyson’s discussion, talking about everything from dinosaurs, to games, to how to passionately lie to your children. Kids were a big discussion point for Dr. Tyson who at one point defined a scientist as “I think a scientist is just a kid that never really grew up,”.

Dr. Tyson spent some time setting the record straight on a number of “scientific” misconceptions like it’s darkest before the dawn and that we have summer because we’re closest for the sun. Of course he didn’t have an exact explanation for the polar vortex.