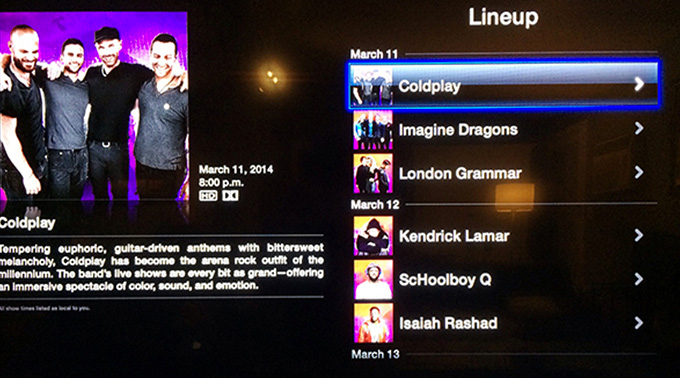 Apple isn’t big on giant US conventions, conferences and festivals. Sure they hold the WWDC here and there’s Macworld as well but Apple is typically, conspicuously from events like CES and until now SXSW with an official presence.

This year, Apple is hosting their iTunes Festival alongside the SXSW music festival which officially kicks off on Tuesday as SXSW Interactive wraps up. The iTunes Festival runs through March 15th and featuring popular artists like Coldplay, Kendrick Lamar,  Imagine Dragons, Pitbull, Zedd and Keith Urban.

“The iTunes Festival in London has become an incredible way for Apple to share its love of music with our customers,” said Eddy Cue, Apple’s senior vice president of Internet Software and Services. “We’re excited about the incredible lineup of artists performing and SXSW is the perfect place to debut the first iTunes Festival in the US.” Apple said in a statement back in February.

Apple has revamped their iTunes Festival channel on Apple TV to incorporate the SXSW event. SXSW badged attendees are participating in a lottery system to get tickets into the actual iTunes festival which is being held at the Moody Theatre.

iPhonehacks reports that the new updated iTunes Festival channel went live on Saturday night. People at home with Apple TV will be able to stream or watch video performances of the entire event.