Drive Club Release Date May Have Been Leaked 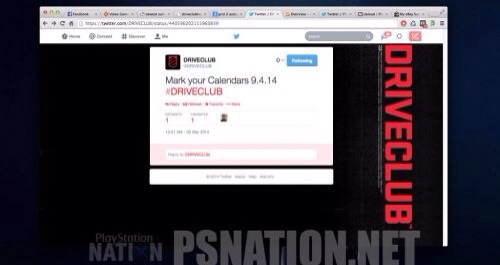 According to gamepur.com a release date for Drive Club may have leaked out on Twitter.

Drive Club, an exclusive PS4 title, was supposed to be a launch title. however after failing to be ready for the US and then the European release date, the game then missed Japan’s PS4 launch a little over a week ago.

Back in January, Drive Club, which has had several release dates was finally downgraded to TBD leaving many looking forward to the game, disappointed.

“I was checking on Driveclubs twitter feed just 20 minutes ago, and when I checked back on it it said 1 new Tweet, so I clicked on it. When I did this showed up, I screen capped it then frantically went to google to find if it had been announced anywhere else. When I got back the tweet wasn’t there.” The PSNation user told gamepur.com.

Before Evolution Studios had a chance to remove the tweet, the unnamed PDNation user took a screenshot for posterity’s sake. Unfortunately no one is confirming the validity of the tweet itself or the release date.

As you can see from the picture at the top the tweet says 9.4.14 which could indicate a September 4th release date. Of course if the tweet is real and Evolution Studios was using European style dating that could mean we see the release next month on April 9th.

Needless to say, many media outlets reached out to Evolution Studios, Sony and even Gamestop and so far, mums the word.