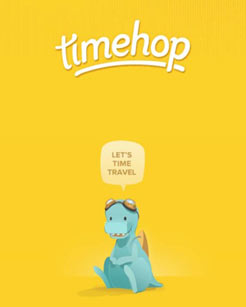 Timehop is a nifty little app that lets you travel back in time through your social media, up to five years. Everyday your Timehop account aggregates all of your social postings from previous years so you can look back and see what you were doing that date, every year up to the last five. The app also typically throws in the biggest news stories for that date.

Now, AllthingsD is reporting that Facebook is beta testing a new feature that will allow users to click a button and see what they posted on that date the previous year. There’s been no mention as to whether or not it will go even further back.  Of course with the Facebook feature it strictly aggregates your previous Facebook posts.

Timehop is a lot of fun, especially on significant days. For instance on my Timehop November 4th five years prior showed me volunteering on the Obama campaign. My timehop on Thanksgiving day this year reminded me of a funny meme I had created for a good friend’s birthday. The Timehops with photos are particularly useful, especially to people who take and add a lot of photos to their timeline.

While there have been no reports to suggest that Facebook has talked with the founders of Timehop about an acquisition, I just read Nick Bilton’s book, “Hatching Twitter”. One chapter of the book takes a good look at discussions and negotiations between Facebook founder Mark Zuckerberg and the founding team at Twitter. At one point Zuck admits that if he can’t buy Twitter he’ll just keep on integrating features that eventually make Twitter irrelevant.

At this point, other than the Instagram purchased. Facebook hasn’t made any significant move to infringe on Twitter’s territory.