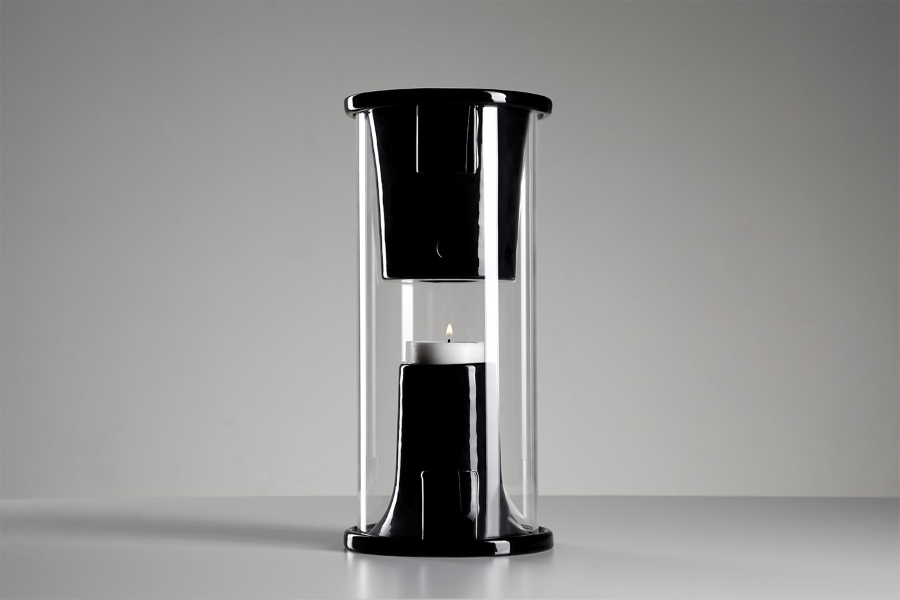 The first thing that jumps out is the internal candle. The candle is actually the speaker’s power-source:

Pelty represents a technological revolution in the high-quality audio speakers’ market: it is the first Bluetooth speaker literally POWERED BY FIRE!

Yes, that’s true! Pelty works transforming the thermal energy generated by the heat of a candle into the electric energy necessary to power-up the speakers, with an excellent audio quality!

There is neither battery nor electric plug-in! Only the primitive energy of fire makes it work!1

The Pelty speaker is study in minimalism. Rather than using the standard plastic design, the speaker is constructed with ceramic, glass and wood. “Pelty is an elegant device with a refined taste addressing all the people willing to stand out from the idea that technology needs batteries, wires and an electrical plug.”2

The Pelty makes use of the Peltier effect:

Thanks to a patented technology based on the Peltier effect, it transforms the thermal energy of the fire of a candle into electric energy able to turn on the speaker and amplify the music. The wireless bluetooh technology and the total absence of wires make of Pelty an object of complicated technological design.3

Though the Pelty is clearly a remarkable device, the price tag is a bit steep for it to have mass-market appeal. At $229, the Pelty is one of the most expensive Bluetooth speakers on the market. Here is a look at the device: