As we are rapidly approaching the launch date – Feb. 24 in Barcelona at Mobile World Congress of the new Samsung Galaxy S5, the news, leaks, and specs are coming out on an almost daily basis. There is an awful lot of pure speculation, but there are several features that are widely agreed upon.

First and foremost, there will be a bigger display, both in actual size and in resolution. According to a Bloomberg Technology article:

Samsung Electronics Co.’s new high-end smartphone will have a larger 5.2-inch screen and a sharper display than the current Galaxy S4, according to a person with direct knowledge of the matter.1 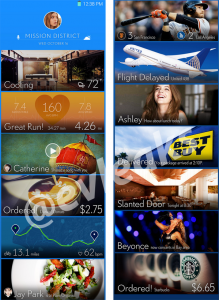 This seems to be very much in line with what Lee Young Hee, Samsung’s mobile executive vice president, told Bloomberg at the 2014 International CES:

When we moved to S4 from S3, it’s partly true that consumers couldn’t really feel much difference between the two products from the physical perspective, so the market reaction wasn’t as big…For the S5, we will go back to the basics. Mostly, it’s about the display and the feel of the cover.2

Further, there have also been several leaks of a redesigned UI for the Galaxy S5. Both of the images to the left – from @evleaks, who is an excellent follow if you don’t already – provide a look at the new, tile heavy UI. 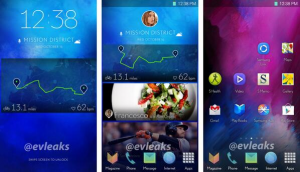 Although, “Samsung studied the possibility of using eye-scanner technology in the new phone for the first time,” it looks as if that particular feature will be left off of the S5.3 That said, there are definitely some impressive features. The flagship device will feature a 16-megapixel camera; the S5 will make use of a fingerprint scanner, much like the iPhone 5 models. There are several sites that will be live streaming the announcement, and we will update with links once they become available.